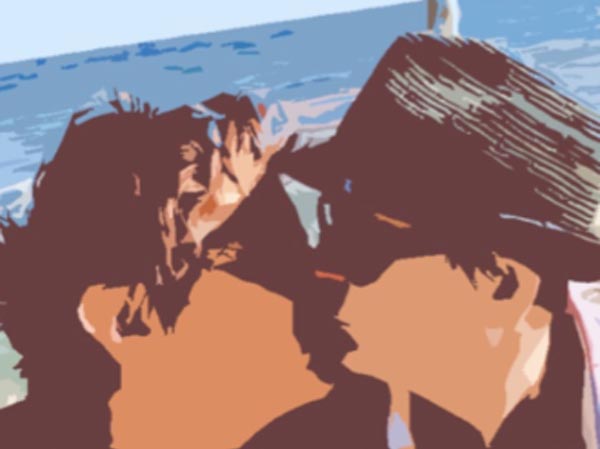 Thirty years on from Shirley Valentine, Janet takes a holiday to Greece. There she meets the woman of her dream, in a suit and tie singing Frank Sinatra songs.

To a backdrop of his greatest hits, All or Nothing at All, Strangers in the Night, I’ve Got you under my Skin their romance unfolds and Janet realises this holiday was a departure in more ways than one.

This new play comes from the writing, performing and real life partnership of Ali Child and Rosie Wakley follows the remarkable success of their debut show All The Nice Girls which was nominated for the Outstanding Local Talent Award at Brighton Fringe 2015 after beginning life at the Salisbury Fringe in 2014.

Deep in the Heart of Me picked up a nomination for Best LGBT+ Show at Brighton Fringe 2016 and was also featured in the Fringe WINDOWS Showcase.

Since May, Ali and Rosie have taken the show to the International Women’s Festival on Lesbos where they performed in an open air cinema to an audience of people from all over the world.

This modern coming out tale is peppered with songs from the rat pack repertoire and is a treat for lovers of jazz, swing and Latin, with some country and western thrown in.

It’s a comic, sensitive and touching account of a middle-aged woman’s struggle with issues of sexuality, loneliness and the empty nest. It’s a story that moves and engages audiences, with opportunities to join in with karaoke and dancing.

Selected by a panel for the Brighton Fringe Windows Showcase 2016 this show is earmarked as one not to miss and is presented in tandem with their latest show, Fall of Duty which has been selected for the Window Showcase 2017.

Ali says: “Our shows celebrates lesbian love in a witty, joyous, musical way. Audience members can expect to sing along, to laugh and be moved.”

Deep in The Heart of Me is suitable for everyone aged 12 up.

Event: Deep in The Heart of Me