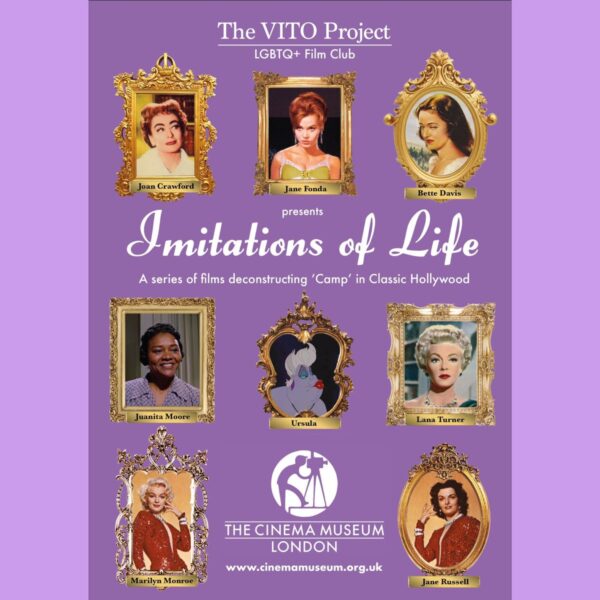 Forget your troubles, c’mon get happy, and join The Vito Project for IMITATIONS OF LIFE: DECONSTRUCTING ‘CAMP’ IN CLASSIC HOLLYWOOD. This season of cherished Hollywood classics, which begins on September 11 deconstructs the elements that make camp, CAMP! From fearless and uncompromising women to glossy technicolour worlds, to some of the best eyebrow acting ever committed to celluloid, the screenings explore how camp has been used not only to entertain moviegoers, but also as a tool to get subversive queer, feminist, and socially-charged content to the screen – while eluding critics in the process!

The season begins with Marilyn Monroe in Gentlemen Prefer Blondes (1953) on September 18, then continues with Walk On the Wild Side (1962) on October 23 starring Barbara Stanwyck and Jane Fonda. A Joan Crawford / Bette Davis double bill with Beyond the Forest (1949) and Queen Bee (1955) lights up the screen on November 20. Then it’s the classic Lana Turner melodrama Imitation of Life (1959) on December 11. As an extra treat to welcome you into 2023, the season concludes with a classic Disney double bill of The Little Mermaid (1989) and Beauty and the Beast (1991) on January 22.

Each screening is preceded by an introduction and followed by a panel discussion and conversation with the audience. Doors open one hour before start time for socialising.

The Vito Project say: “This is a glorious series of movies to laugh with, cry over and clutch your pearls to.”