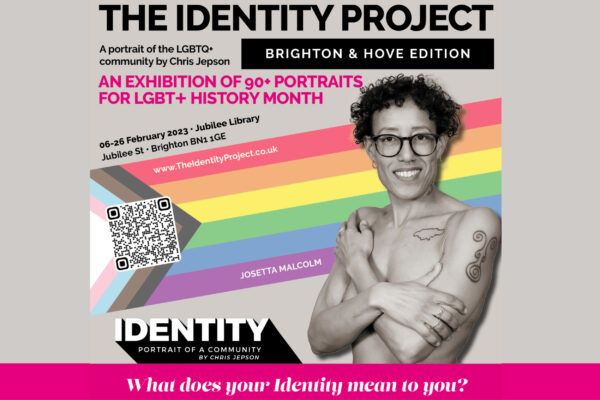 What better way to celebrate Brighton & Hove officially being the queer capital of the UK than by having an exhibition of portraits of our community?

The IDENTITY Project – A Portrait of a Community by award-winning photographer Chris Jepson is an exploration of what it means to identify as a member of the LGBTQ+ community today.

After more than 20 years working for various LGBTQ+ media, the project was conceived in 2019 to redress the unhealthy bias of the visual narrative in mainstream media that LGBTQ+ people look a certain way.

By exhibiting in public places, this collection of the diverse faces of Brighton & Hove’s LGBTQ+ community aims to reduce stereotypes in the wider public by challenging assumptions of what this marginalised demographic looks like, and give young queer people and those from marginalised backgrounds role models to look up to.

Photographer Chris Jepson says: “Homophobic and transphobic hate crime continues to be a blight in our society. Hate is often motivated by the unknown, and by displaying this exhibition, the project will help improve community cohesion through making visible the depth and similarities in the identities we share.”

The Identity Project – Brighton & Hove Edition was published as a zine in December 2022 but this is the first time the 90 portraits will come together in one exhibition. Many of the participants have intersectional identities and experiences of marginalisation, for example, LGBTQ+ people of colour or LGBTQ+ people with disabilities, and many of the 90 are activists, who have fought for the inclusion and rights of LGBTQ+ people over the past five decades.

Chris adds: “Portraiture, whether painted, sketched or captured on film, has always been inextricably linked to the notion of identity and these black and white images encourage the viewer to look beyond the paraphernalia of location and engage directly with the sitter.

“All families have disagreements and moments of discord, and the rainbow family is no exception, but this project shows that our rich diversity is our greatest strength.”

A Kickstarter campaign fundraising to cover the print and production costs is already over half way to its target. If you can support, CLICK HERE