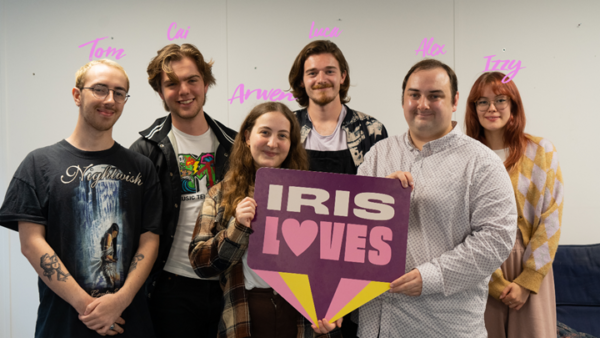 Twelve new feature films will be shown during the 16th annual Iris Prize LGBTQ+ Film Festival in October, including three films directed by previous Iris Prize alumni. The jury for Best Feature is made up of six students from the University of South Wales, Film and TV Wales; a great opportunity for the students to learn from and meet award-winning filmmakers from all over the world.

This year, the feature films chosen to be screened come from the USA, Canada, Poland, Norway, Australia, Italy, Lebanon, Ireland, the Philippines, and Thailand.

Themes this year include coming of age and coming out; family obligations; small-town scandal; and sex, lies, and cold-blooded murder!

The Cardiff-based LGBTQ+ film festival also boasts the world premiere of Barrio Boy, directed by Iris alumnus Dennis Shinners, who has been previously shortlisted for Area X in the inaugural Iris Prize festival of 2007, and for the short version of this feature, in 2013.  Dennis is also a member of this year’s international Iris Prize jury.

Other features being shown during the six-day festival include Before I Change My Mind, directed by Trevor Anderson, another Iris alumnus who has had three films shortlisted previously: Rock Pockets, 2007; The Island, 2009; and The Little Deputy, 2015. This is Trevor’s first feature, and he will be attending the festival. Also showing is So Vam, made by Alice Maio Mackay, a 16-year-old trans woman from Australia.

Two other Iris Prize international jury members have feature films showing: Kamil Krawczyck’s Elephant, and Who We Love, directed by Ireland’s Graham Cantwell. Who We Love has been nominated for six IFTA Awards, including best film, director and script, and was adapted from the short film Lily, shortlisted for the Iris Prize in 2017.

Berwyn Rowlands, Iris Prize Film Festival Director, said: “The feature films we are presenting to you as part of our Iris Prize Festival this year promise to entertain, to engage, and to give the audience plenty of food for thought.  We are particularly pleased to be screening – and hosting one world premiere – feature films made by Iris Prize alumni. Two of the films are based on previously shortlisted Iris Prize film. We hope you will be as proud of the Iris legacy as we are.”

The Feature Film Jury will be awarding in three categories:

Tom Ware, University of South Wales, added: “I am very proud of the Film and TV School Wales students who have volunteered to sit on this year’s jury for the Iris Prize Best Feature Award. This is another excellent opportunity provided for them to spend time with accomplished and award-winning filmmakers as they move from university life to working in the film industry. It also builds on University of South Wales’ successful partnership with Iris that has already created many other opportunities for our students over the last few years.

‘Being on the jury of a world-class film festival is definitely one for the CV and will undoubtedly give them a great start in their chosen screen career, whether it’s directing, editing, or scriptwriting.’

Full details about Iris Prize can be found HERE