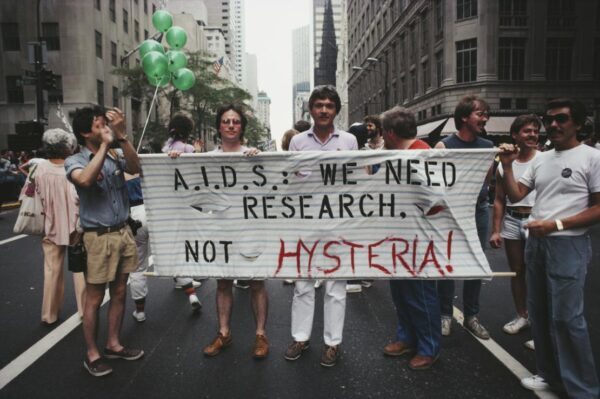 Birmingham-based queer filmmaker Ellie Hodgetts is writer and director of a new short film entitled The Side Ward, which tells the story of a nurse who confronts her own prejudice after building a connection with a patient with AIDS on her ward. Set in 1985 in Liverpool, the film follows Rosie, a middle-aged nurse working the nightshift at a hospital on Christmas Eve.

During this time, Rosie befriends Steven, a patient with AIDS, and as their connection and mutual understanding builds, Rosie begins to confront her own prejudices about HIV, as well as the prejudices of those around her.

“I’m a Birmingham-based filmmaker, particularly motivated to make films centring women and the LGBTQ+ community, with a focus on 20th century queer history,” said Ellie, who also wrote and co-directed BFI and Dublin Pride supported short film Fairview Park – a production based on the homophobic murder of Declan Flynn.

Ellie is joined in the production of The Side Ward by producer Laura Torenbeek, an award-winning filmmaker based in Leeds who was nominated for a best producer award at Underwire in 2015, and who has recently produced her second independent feature film. Laura is interested in telling the stories of marginalised people and producing in a sustainable way.

In their Greenlit project campaign, the team behind The Side Ward explain, “During the AIDS epidemic, there were several cases reported of medical professionals refusing to treat AIDS patients or those believed to be at risk of contracting the disease (namely gay and bisexual men).

“The stigma around the disease was rife, with many men having to not only face their medical condition, but also the deep shame and prejudice imposed on them by a society that refused to help them.

“Through this film, we hope to share messages of tolerance and self-reflection, as well as the importance of human connection in the darkest of times.”

The Side Ward team is currently crowdfunding for the short film project on Greenlit.