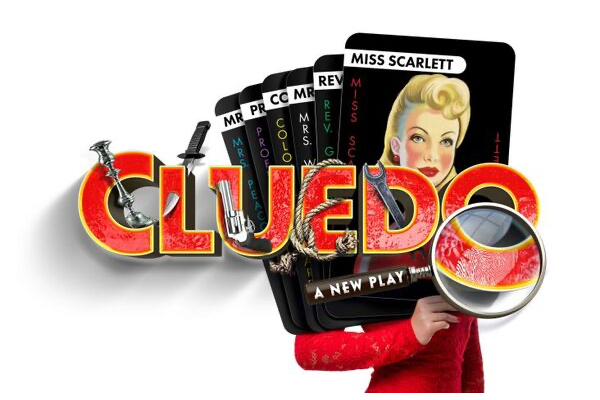 A new  whodunit based on the film, based on the iconic board game, directed by Mark Bell (The Play That Goes Wrong). Certainly plenty of fun to be had there, and the diverse cast squeeze as much fun as possible out of this daft farce.

Fans of the film ‘Clue’ will enjoy this show as there’s lots of clever sharp dialogue, (written by the director of Clue Jonathan Lynn), and action lifted from the movie, although the action has shifted to somewhere just outside London, in the late forties, but with the same well-known eponymous characters all arriving for dinner in a mysterious country house, where all is not quite how it seems, but death is on the menu.

This is whodunnet for the whodat generation, but with quite a few oddly old references, certainly in keeping with the chronology of the play, but opaque to many of the younger people attending.  This farce is executed with panache, choreographed with elegant daftness, giving all the various actors a chance to show off their physical comedy skills, and show off they do.  It’s a very polished performance, everything sliding in and out of play and view, with a measured narrative rhythm, but this need to keep all the pieces in the air exposes some pacing issues which detract from the energy and there are times when it feels like filler material.

I certainly enjoyed Cluedo, it’s fun , I laughed out loud, the cast are great and the set is fun,  folding in and out to echo the layout of the rooms in the original game. There’s some delightful physical daftness played out with doors, entrances and secret passages explored in a surreal way with the dimensions of the set.  It’s very meta, or rather trying very hard to be, with our demented butler played by Jean-Luke Worrell breaching the fourth wall in an alarming charming way, echoing Tim Curry’s charming but threateningly bonkers performance. He’s the fulcrum of the play and makes the most of some questionable material and choices.

I found the tired ho-mo-sex-ual jokes tut worthy, and ending the play by outing the queer character as straight was just weird (as it was in the film), there’s some peculiar rough edges to the dated in-context script too,  nursery rhymes and spiritual hymns making some-kind-of ‘alluded to’ point …..that ain’t nostalgia, it’s uncomfortable.  With so much updated and so much just imported wholesale from the film there was a lost opportunity to bring the script up into a fully inclusive space. Some well written political jokes which were really funny but weren’t given the space they needed to land got lost in the timing issues.

Cluedo was this; a great farce trying to escape from a rather dull game, but trapped like a trap in a trap, wriggling with all the energy of a committed talented cast, sometimes fighting against their material with real verve and mostly succeeding, but there were quite a few moments where it didn’t work.

When it did work it shone, they certainly make a scene of the crime, with some delirious character acting, silly accents, glorious puns and giggle worthy word play, perfectly peculiar surreal moments, and the fun and furious fast action and really cool slow-mo set pieces stood out.  The dynamic tempo allowed the play to run roughshod over the thin premise of the game. The  audience certainly seemed to enjoy themselves and the cast did too. Even if we’ve all seen the ‘oh dear, my moustache’s falling off by accident never happened before’ gag a few times too often, it was done with sincerity and the audience believed in it.

I’m no fan of the game, but this performance and play is given a sense of irreverent middle-class teasing, oozing privilege and charm, it’s less than it seems, but a thick cheesy ham sandwitch served fresh and with dollops of attitude is fun nonetheless.

For more info or to book tickets see their website here