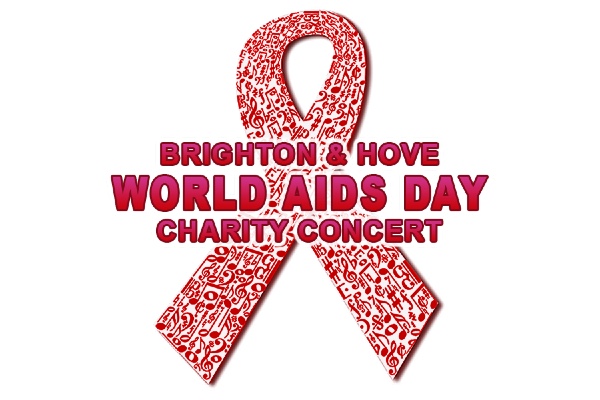 For those of us in the Queer community, and our allies, World Aids Day on December 1 is always a poignant anniversary of those we lost and those who miraculously survived. This year it’s also the 40th anniversary of the marvellous Terrence Higgins Trust which has done so much to lobby for and support the community.

Brighton’s commemorative concert – at St Mary’s Kemptown- is a chance to remember but also to celebrate what has been achieved and ponder on what yet needs to be done. It’s a bumper evening where our 5 big choirs perform separately and together, and this year had the added bonus of quick and light-hearted compèring from Alfie Ordinary.

I counted 23 musical items and it’s impossible to elaborate on each one but my highlights were: the opening set by Rainbow Chorus, directed by Aneesa Chaudhry, gave us a haunting Rune Carol, and the tear-jerking You Will Be Found from the musical Dear Evan Hansen.

A comic and quirky interlude followed from Qukulele – literally a Queer group of uke players – definitely the off-the-wall act of the evening.

Closing the first half were Actually Gay Men’s Chorus (director Samuel Cousins), who gave us two medleys – an ever-popular tribute to Eurovision, followed by a nod at the 80’s- both great crowd pleasers.

Resound Male Voices and its female partner group Rebelles (director: Sam Barton) gave a really classy act – Resound kicked off with its polyphonic Non Nobis Domine, followed by the dramatic, moody and mystical Visions of Gideon and Voice Of the Bard.

The 9 voices of Rebelles soared through the church and were spine-tinglingly good in Deep River and the South African anthem Weeping. Joining forces they ripped through the building with the stunning When Thunder Comes.

But it got better still with the trio of Sam Barton, Sam Swan and Aneesa Chaudhry giving us Lloyd Webber’s Pie Jesu – Anneesa’s top notes and powerful vocal range were stunning to hear. They were joined by Samuel Cousins for a camp and outrageous title song from Phantom – fabulously sung and great fun too.

The final set was in the hands of Brighton Gay Men’s Chorus, directed by Joe Paxton. They gave us a deluge of sound in It’s Raining Men, but it’s their Queerly resonating version of Secret Love that really sets an evening on fire. And they even bettered that by joining forces with all the other performers in an emotional rendition of Over The Rainbow.

The proceeds for the evening went to the amazing Lunch Positive who provide so much more than food, with their safe space for the vulnerable. Gary Pargeter, its boss, introduced a volunteer Matt who took us on his journey from HIV diagnosis to acceptance and good health. It was a privilege to hear him.