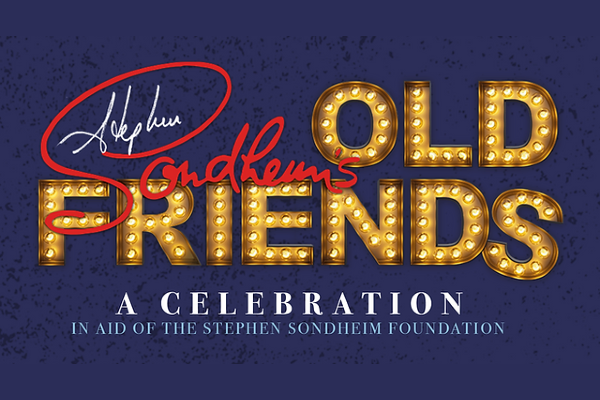 So it’s great that we now get to see it on our screens at home, thanks to an edited compilation of its two performances in May 2022.

The cast spanned 8 decades, and it was fitting that one of Sondheim’s greatest British leading ladies, Julia McKenzie should get proceedings going – her first stage appearance in 24 years. She had a tiny part here but more of her later.

Comedy Tonight then gave us Gary Wilmot and Rob Brydon with the under-credited and vastly talented ensemble, and Brydon followed up with The Little Things You Do Together, coupled with Haydn Gwynne in one of Sondheim’s keynote dark, sarcastic bitter-sweet dissections of the married state.

I can’t go through all the offerings but highlights for me included: Michael Ball in the hauntingly agonising Loving You Is Not A Choice, Bernadette Peters as Little Red Riding Hood, putting more sex and self-knowing than is good for a little girl. And Damien Lewis, with little furry ears as the raunchiest wolf you could hope to be devoured by in Hello Little Girl.

We got yet more of Ms Peters in the painfully beautiful Children Will Listen – such amazing emotional honesty and a just a light touch of the top notes. Then we move up several gears to Judi Dench, recreating her stunning rendition of Send In The Clowns, tearful for her and for us, with just the right dramatic crack in her voice as Sondheim intended for sure.

Maria Friedman and Michael Ball sparked off each other as Sweeney Todd and Mrs Lovett – Maria’s comic timing being pitch perfect, as you’d expect. And of course the audience gets every nuance as Ball croons the ballad Pretty Women, poised to plunge his razor across his enemy’s throat.

There are many fine renditions of the languid, bitter Ladies Who Lunch. Here Haydn Gwynne makes its dark, sad, self-justifying and so much more. And the tears surely follow when Chichester Theatre boss Daniel Evans joins Bernadette in the glorious Sunday, with its exquisite harmonies. A perfect Act One closer.

Rob Houchen led a testosterone-filled ensemble for Tonight, and then the tone lightened for Gary Wilmot as a reluctant rehearsal/audition pianist accompanying not only Julia McKenzie, but also Friedman, Peters, Bonny Langford and a further clutch of divas in a delicious high-kicking rendition of Broadway Baby. When asked to play the Sondheim tune, Wilmot sharply replies: “ I’ll need all my fingers then”.

Before you can blink it’s Bernadette again, with Anna-Jane Casey and Bonnie in a sensational You Gotta Get A  Gimmick. But were we ready for the legendary Petula Clark to give us I’m Still Here, working every line, every note and it really feels like a statement about her own career and it is really really touching.

Janie Dee gives us the fiendishly difficult tongue-twister The Boy From, then it’s back to Bernadette for Losing My Mind. It could have been written for her – edgy, painful, heart-rending, in her own tempo and her own electrifying style.

And the strong female characters just keep on coming: Imelda Staunton, who apparently had no rehearsal, belted out Everything’s Coming Up Roses, as if her life depended on it – absolutely show-stopping. And to follow – oh my! Julia McKenzie, with Not A Day Goes By – a personal tribute from her to Sondheim, joined by Michael Ball, Maria Friedman and others as we were shown photos from the great man’s life. If you’re a fan, this will make you cry and it’s followed by an absolutely stunning arrangement of Being Alive, underlining that Stephen survives in his life’s work for the stage and screen.

And the show ends fittingly with unnamed young performers at the start of their careers singing the optimistic Our Time.

I must also mention that there’s fabulously varied, often under-stated choreography from Brighton-based Stephen Mear, which helps to make this a night to remember.

You can catch it on BBC iPlayer. And maybe you’ll want to more than once.