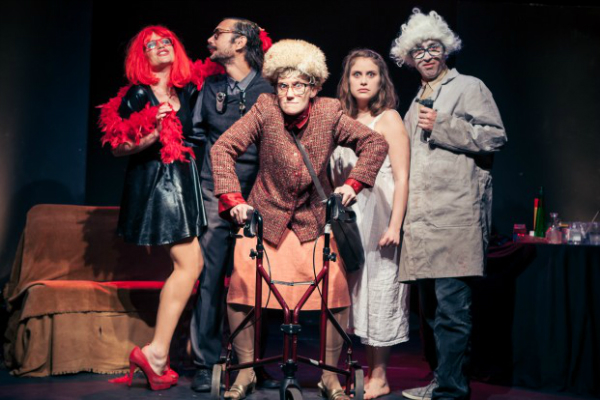 Some of the improvisation was just daft but endearingly so and the audience fully trusting the performers were up for anything, re-running scenes three times to get them right, characters complaining about the wrong ending, and lots of exploding of cinematic and televisual pretentions this was a meta media piss up and a down in the hood deconstruction.

So cool it was uncool and not scared of letting the laughs dictate the pace of action this troupe of talented folk seemed to be having as much fun as the audience and it was difficult to tell what was designed in as fun and what happened by chance and was quickly woven in, although I suspect the tough as old police boots MI5 dyke being hit in the face by a suddenly exposed and bouncing cock was not entirely scripted, very funny none the less. With some tongue in cheek cinematic references from Saw and True Romance and a nice Tarentino ending of meta deconstructive fourth wall breaching orgiastic fun this was as seriously funny and wonderful funny tightly written and brilliantly acted hour of Fringe perfection.

There were a lot of sight gags and some stuff I missed I felt like I’d like to watch the show again to catch all the bits I missed, the music was top form too with funny jingles and songs threaded throughout the performance.

If you can get a ticket, get one, if not shag the bar/door/cast/cleaner to get standing room at the back.

You can also buy last minute tickets on the door (if you are very, very lucky or fit) from the Cardboard Box Office at the Marlborough Theatre.