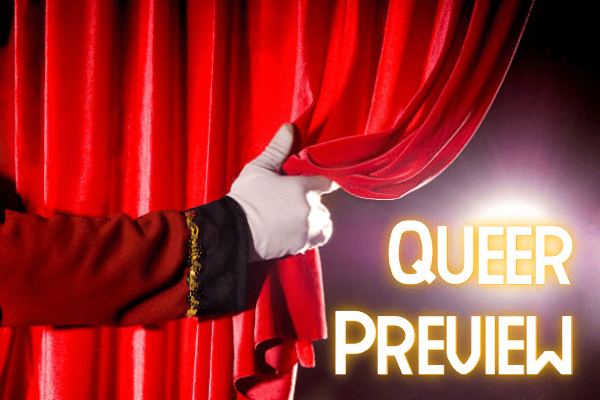 There’s lots more joyous stuff to see on stage and online moving your way, and here’s my pick of the best.

Moment of Grace is a play capturing Princess Diana’s visit in 1987 to Britain’s first specialist HIV/AIDS unit at London’s Middlesex Hospital. The iconic image of the ground-breaking visit was her handshake with an AIDS patient. It was an image that went round the world and helped to change attitudes.

Based on personal testimonies, it shows the impact on Andrew, a patient, Jude a nurse and Dominic, a fireman estranged from his son. The play was created by Backstory Ensemble Productions, in association with The National HIV Story Trust. It runs until 16 July at the aptly-named Hope Theatre in Islington High Street. There will be a panel Q and A session with the cast and  guests on 9 July.

I reviewed a streamed online version of the play in lockdown and it was truly staggering.Tickets at www.hopetheatre.com

Non-binary Brighton-based drag queen Crudi Dench is one of 3 finalists for the rather bizarre Dabbers Social Bingo national Next Top Bingo Caller contest – I kid you not. Set in East London, Dabbers is apparently where  “ cool” bingo kids go. Gone are the days of “ two fat ladies – 88”; this is a showcase of the callers’ musical, comic or cabaret skills,while working the room.

Crudi is the persona of Matt Stallworthy – they have just appeared at Brighton Fringe in their show Drag Queens versus Zombies. The final is on 3 July -‘we’’ll let you know how it goes for Crudi.

Brighton’s Rainbow Chorus will be celebrating 25 years bringing Queer singing to local audiences when they stage their latest concert on 9 July. They’ll include songs from shows like Jesus Christ Superstar, Dear Evan Hansen and A Star Is Born, under the direction of Aneesa Chaydhry. The concert is at St George’s Church, Kemptown. Tickets rainbowchorus.or.uk

And Resound Male Voice Choir will also be singing in their summer event 0n 22/23July. Put A Ring On it, is an international celebration of love and marriage, with this choir’s hallmark eclecticism.It’s at Brighton’s Chapel Royal. Tickets ticketsource.co.uk

Those brilliant theatre-makers at Original Theatre have an online offering, which is thought-provoking to put it mildly. Ben Brown’s The End Of the Night deals with the final days of World War II and a secret meeting between a member of the World Jewish Congress and the architect of Hitler’s Holocaust – Heinrich Himmler. Can an agreement be made to spare the last remaining inmates of the infamous concentration camps?

It follows a run at the Park Theatre, and there’s a warning that it contains explicit descriptions and anti-Semitic language. Tickets at originaltheatreonline.com

And finally, Dr Adam Perchard is described as “the senational bathroom diva lockdown star and Queer cabaret legend”. That’s quite some title and you can judge for yourself when their Bathtime For Britain show comes to Brighton’s Ironworks Studio on 26 August.

Adam, a critically-acclaimed non-binary singer, comedian, playwright and poet have performed all over the country including the National Theatre. They became a viral sensation in lockdown with a series of online videos of songs direct for their bathtub. Tickets at ironworks-studios.co.uk