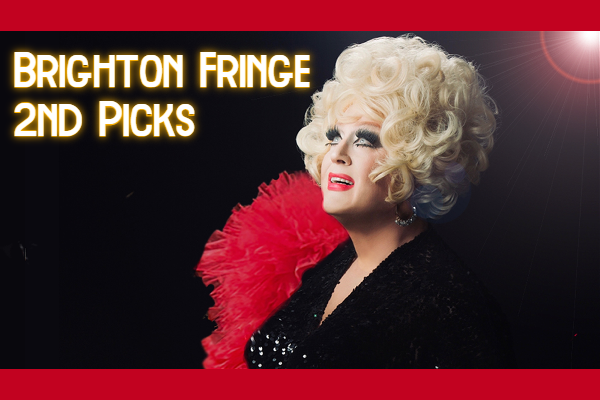 With Brighton Fringe well underway, here’s my second pick of shows that took my fancy. Musclebound by Rosy Carrick features the obsession with bodybuilders and 80’s action films as the two worlds collide. If you’re into Conan being stripped, beaten and humiliated then it’s made for you. It plays at the Rialto Theatre 20-22 May.

Clean: The Musical is an award-winning show about the women of Laundry Hill, Brighton. It’s a story of hardship, suffrage and sexuality. It’s at One Church, Gloucester Place 20-22 May.

PurSUEt is at the Rialto 21-29 May. Set in a therapist’s office, where she’s been sent to deal with a drink problem that she doesn’t have, our heroine needs only one thing- celebrity Sue Perkins. They are meant for each other if only Sue could see.

Also at the Rialto is Underdogs. It’s 1998 and there’ a world record to break – the longest time buried alive. It’s a true, hilarious tale of courage, endurance, hope, despair and media manipulation. It runs 24-28 May.

The Best Of Miss Hope Springs (It’s a very short show) showcases the Brighton Fringe 2021 award-winning deluded and fading cabaret star, wandering down a very pot-holed Memory Lane with songs and reminiscences of what might have been but probably never was. She’s at the Rialto 24-26 May.

Among the Brighton and Hove Pride Bursary award winners are two shows you might be interested in, which are still to show. Tell Me Why is at the Ironworks Studio 19-22 May. It’s a musical theatre piece incorporating gender fluid, non-binary and Trans themes by NoAgEnDeR company.

I Can’t Believe It’s Not Gender is at the Caxton Arms 23-5 May. It’s billed as a chaotic and ridiculous exploration of the rituals of life and how Queer people navigate, reinvent and destroy them.

Best Served Cold by Sean Denyer- the subject of a recent Scene feature article- is at the Round Georges 26-29 May. It’s staged by Irish Queer theatre company Acting Out and tells of a random meeting, an ex-boyfriend and Queer revenge.

Killer Queen is by the cutely-named Sodomite Arts Co. This is a dark psychological drama set against a backdrop of political upheaval, unrest and the fight for equality spanning the 70’s,80’s and 90’s. It explores sexuality and the eternal quest for love -or is it just lust? It’s at Club Revenge 27-9 May.

A Pole Tragedy is at the Old Market 27-9 May. By Sofie Kramer, its a mind-blowing pole dance performance based on Iphigenia in Audis, the Greek tragedy – billed as a sweaty duet.

Cinebra – Glenda and Rita sing the Movie Greats – is at the Spiegeltent 1-4 June. Two actresses from the Golden Era of Hollywood take us on a journey from Flashdance to A Star Is Born.

Voice Of Evil is a show by Queer ventriloquist/clown Lachlan Werner. Lachy is a poof and apparently a virgin. Brew is a small squishy witch and she has decided to sacrifice him. In this spooky funny adventure – be careful not to be pupeteered! It’s at the Rotunda, Regency Square on 31 May and 1 and 5 June.

Ticket information on these and all Fringe shows at brightonfringe.org

And look out for reviews of some of these in Scene