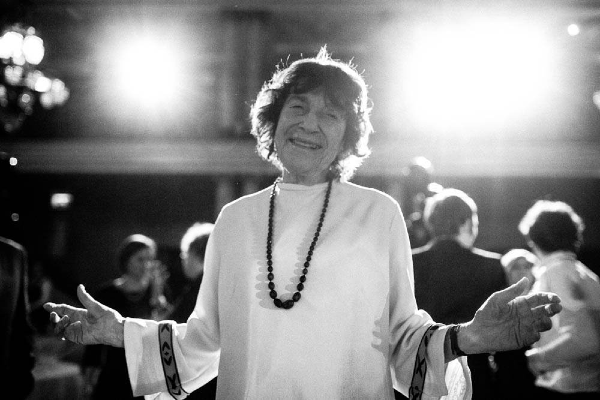 Lynn Ruth Miller, who has died just short of her 88th birthday will be the subject of a special charity fund-raising show at London’s top cabaret venue the Phoenix Arts Club.  Order tickets for the live show and the streamed event here.

Lynn, who loved to perform at the Phoenix and celebrated her last five birthdays there, will be remembered in a night of entertainment on 11 October on what would have been her 88th birthday.

A teacher, writer and artist, she first went on stage at the age of 71 as a stand-up comic and notably starred at Brighton Fringe and is in the top 100 performers on Britain’s Got Talent, where she made Simon Callow laugh, though he denied it on the programme.

Unusually she was also a stripper, but her comedy proved that ageism in entertainment is null and void. She won many awards including ones from Time Out and the Soho Theatre. The show will be performed in front of a live audience, will be live-streamed and also available afterwards online via subscription.

The show will raise funds for St Joseph’s Hospice, where she spent her last days and Cabaret vs Cancer. Hosted by Paulus ( The Cabaret Geek) it will feature Desmond O’Connor, Dusty Limits, Kiki Lovechild, Ada Campe, Ivy Paige, Belle de Beauvoir, Steve Gibson, Josephine Lacey and more names yet to be announced.

Lynn Ruth Miller performed at Brighton Fringe 11 times between 2009 and 2021, winning the “Star of the Festival” award in 2009. She was the compere for the Brighton Fringe launch at the Old Market in 2012 and the 2020 Registration launch at the Comedy Museum in London. She took part in the Brighton Pride Parade in 2016 hosted by the LGBTQ+ Workers Forum as a proud ally of the LGBTQ community, driving through the city in an open topped car in her famous white ostrich feather burlesque outfit, she hosted and appeared on a number of online TV shows, particularly with the Latest TV from 2012.

Julian Caddy , Chief Executive of Brighton Fringe told me:”Lynn Ruth lives on. Her voice echoes in our heads. Her wit, her inquisitiveness, her encouragement and her positivity. Talking and talking and talking. The laughs, the long dinners, deep conversations, extensive email exchanges: putting the world to rights.

Her generosity of spirit, her constant energy and fearlessness. Even living in London, she would not think twice about jumping on a train and going to Brighton and back in one day, returning alone late at night. Or walking ever so slowly, arm in arm, through city streets.

She remains a paradox as well. She is the cheeky, stripping grandma with dirty jokes but also the teller of deeply unhappy stories, profoundly sensitive and often tearful. We would help each other with problems and give advice and support. Whether with the Latest shenanigans, her moving from San Francisco to Brighton and then to that London flat “with the Jews” or her supporting me through my divorce.

Upon receiving the news of her cancer, her last message to me was “I am very scared”. That makes me so sad. She didn’t deserve it but at the same time she had lived one hell of a life and she knew it was coming. But bloody hell will I miss you Lynn Ruth. We are all better for having known you”.

Tickets for the live show and the streamed event at phoenixartsclub.com