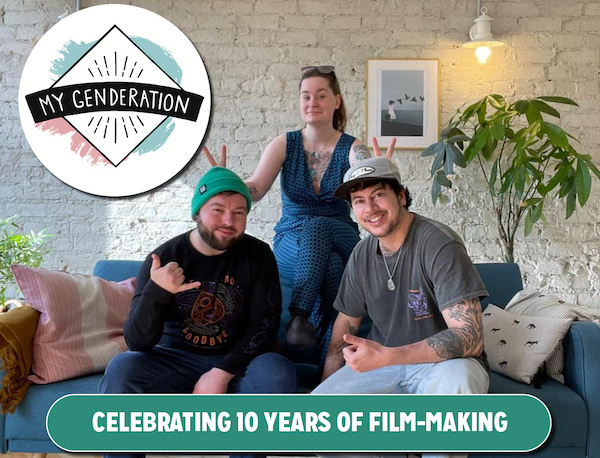 Join My Genderation, a non-profit film project that celebrates intersectional trans lives and experiences, in celebrating 10 years of trans documentation and celebration of trans lives with a special screening of hand-picked clips and short films created over the past decade at Ironworks Studios in Brighton on Thursday, July 14.

The films will be introduced by core members of the My Genderation team, including co-founders Fox Fisher, Lewis Hancox, project manager Owl and some special guests.

There will be a stall with clothing, patches and stickers to help raise funds for future My Genderation content.

At the event, you’re invited to share stories of how My Genderation films have helped or inspired you over the years.

My Genderation was started in 2012 by Fox and Lewis Hancox after taking part in the mainstream documentary series My Transsexual Summer on Channel 4. Following on from the series, Fox felt there was a real lack of authentic representation of trans people in film, and set out to capture stories about the people around them.

All of My Genderation’s content is created by trans people, about trans people, for a much wider audience — currently run by Fox Fisher and Owl.

Now 10 years on, My Genderation has over 100 short films, some broadcast on the BBC and C4, as well as being screened all around the world at film festivals.

For tickets to the event at Ironworks Studios, CLICK HERE