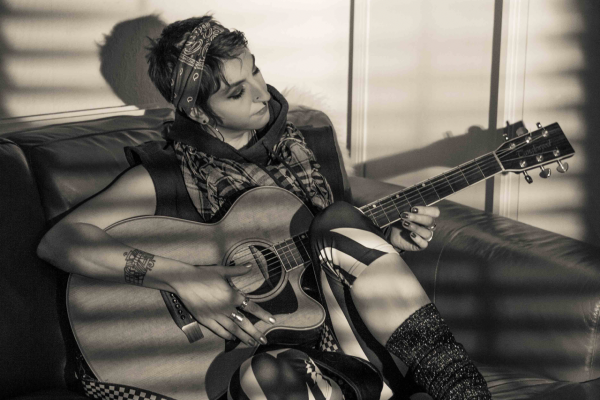 Brighton-based performer Zora has a unique, captivating and soulful voice which compliments her spellbinding renditions of cherry-picked cover songs, including Tracy Chapman, Tori Amos, LP, Adele, Aretha Franklin, KT Tunstall, Alanis Morrisette and Queen, interspersed with charming and unforgettable originals. Graham Robson caught up with the prolific singer-songwriter who’s also one half of Brighton lesbian duo Dryadic to talk about new music, what she’s been up to during lockdown and where you can catch her online.

Hey Zora, how have you been spending your time during lockdown?

A mixture of intensely creative, active and productive periods followed by total exhaustion and lack of motivation when all I can muster is biscuits, duvet and online scrabble! I have tried very hard to embrace online shows and have taken part in a number of live streams, pre-recorded shows and put on some of my own shows.

I arranged and hosted a live Facebook fundraiser for Lesbian Visibility Day with another six lesbian artists and we raised £220 for LGBTQ+ anti-violence charity Galop, which was fab! ( you can see it again here if you missed it) I find the online shows particularly exhausting though and am taking a little break before another run of three or four starting on Friday, May 22 with The Brunswick’s Seclusion Showcase. I spend a lot of time walking my gorgeous dog and obviously do that everyday.

Have you found it hard to adjust to working from home?

I can’t really express how much I’m missing playing out, and of course I lost all my bookings, including my tour that was booked in April, which is gutting and very worrying so in that respect, not adjusted at all really; so much of the other side of music – writing, marketing, practising etc is done from home so that hasn’t changed much for me, but instead I have no income now! I had just started teaching when lockdown arrived and I’m offering online lessons now instead.

What’s been the biggest impact to your creative output?

Not being able to meet and play with Joanna (the violin player from Dryadic – my folk-roots band) and other musicians that I play with. It can also be hard to get inspired under these circumstances. Inspiration often creeps up unnoticed or unexpectedly through human interactions, journeys and experiences and obviously there’s a lot less of these in my environment. Although, when inspiration does hit, it is possible to get in a bit of a creative vortex easily because there’s not as much to distract me.

Have you caught much online?

Lots of music streams yes and a few binge shows. I really enjoyed Pose, Rocketman and Bohemian Rhapsody and I just watched Fleabag for the first time but mostly I watch gigs. I must admit I watched L Word Generation Q the second time over in a few evenings but I was also re-stringing and cleaning up all my guitars at the same time! I don’t watch a huge amount of telly and I only have a laptop for online stuff.

Do you have any comments on how lockdown is affecting the LGBTQ+ community?

I worry about about the effect on people with mental health issues and at risk of domestic abuse. That’s why I chose Galop charity for my Lesbian Visibility Day fundraiser gig, because they host the LGBTQ+ Domestic Abuse helpline. Also, our community has a higher rate of mental health issues so I feel concerned about that too and mental health services are being pushed well past their limits right now. I hope that it has prompted people to pull together and support each other and I’ve seen lots of this myself however the LGBTQ+ community is disproportionately affected by social issues like abuse and homelessness and people might have less access to the online support because of this.

Just to get back to gigging and teaching as much as possible. I’m hoping to start a Masters Degree in songwriting in September and I would be surprised if that doesn’t go ahead so I have that to look forward to. I still plan on finishing recording my album with Dryadic at the end of the year and I would like to re-arrange the tour we had to cancel as soon as I can. In the meantime we still have our recent studio recordings to release – look out for the first one of them on Friday, May 29 called Pass It On – it’s really exciting and we’re super proud of the work we’ve been doing in the studio just before lockdown.

Any tips to keep busy?

Ooo I’m not sure I can, I’m a bit crap at motivating myself! Audiobooks are lovely, and podcasts as they engage your brain without having to read or stare at a screen – and you can do the dishes at the same time if you need to! I find that making a plan last thing for next day with some exercise in it (for me that’s yoga, kickboxing, running or cycling with the dog) to start with is good because after that I feel energised, positive and clear headed. Im REALLY good at making coffee and toast and getting back under the duvet though! I don’t need more stuff to keep me busy as I’ve still got tonnes of work to do.

Yes! My new single with Dryadic is out on Friday, May 22! It will be released on Spotify, Youtube, Amazon, I-tunes and all the usual places and we will be streaming a release gig that night at 8pm on Facebook, Instagram and Youtube. We’ve also got a live version on video being cut to accompany it. It features Paul Diello from El Geebee Tea Queue and its a fantastic tune for lockdown as its all about spreading love and cheer between friends and family.

If you’re interested in coaching get in touch via my website – there’s loads of info on there about what I do and my various musical projects.

Also, if you’d like to watch the Lesbian Visibility Gig it’s available here from the original event page on Facebook, or search for Lesbians Go Loud and Live for Galop.

Any words of wisdom to help us through?

Get yourself a stripy hammock and hang it at the end of your garden and lie in it and listen to music when you feel a bit low – works for me!