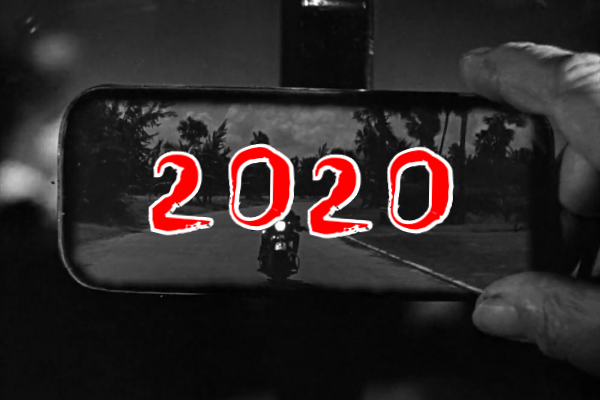 Regular readers might wonder why I’m offering a review of shows and films in 2020 but in fact necessity created many mothers of invention and there was a feast to watch – surprisingly in some genres more than was expected just 12 months ago.

As the BBC took to Zoom and the National Theatre to YouTube, some theatres managed to put on shows outdoors and inside, constantly thwarted by on-off lockdowns but determined that the shows should go on.

My heroes of 2020 are the organisers of the Eagle Garden Theatre, Vauxhall , where behind a small pub  I watched the wonder of theatre in the queer musical Fanny and Stella and the resurrection of an intimate version of the evergreen Pippin.

Nearby is the LGBTQ + Above The Stag Theatre , where the magic evening was Buyer and Cellar, an endlessly clever concoction about a gay actor and his relationship with La Barbra Streisand.  When West End theatres opened, sadly briefly , Nimax did us proud with Potted Panto – 7 pantomimes in 70 minutes, and with those brilliant improvisers Showstoppers – with a new show every night.

In Brighton the Fringe re-created itself and Andrew Farr’s reincarnation  of Edith Piaf was stunning as ever, even against a backdrop of a wind-lashed Brighton seafront at the Warren Outdoors . Brighton Open Air Theatre also braved the elements of autumn to mount a wide range of shows and Conor Baum brought us almost instant Shakespeare in a Hove garden .

Before lockdown,  international superstar Ute Lemper raised the roof at the Old Market with her stunning tribute/memoir of Marlene Dietrich . In London the much under-rated musical City of Angels , choreographed by Brighton -based Stephen Mear was in  previews when Boris shut the theatres – I really hope to see it resurrected in 2021. And in London the Pet Shop Boys/ Jonathan Harvey musical solo performance  Musik thrust the wonderful Frances Barber at us in a crazy tour de force show.

From our sofas there was no shortage of gems to watch – the National Theatre’s  @Home created a whole new audience with treats like Treasure Island, two contrasting Frankensteins, A Streecar Naned Desire, Amadeus and the Barbershop Chronicles – and now we’ve got a fee-paying channel from the NT to keep us going.

Other streaming gems included Lorna Dallas at the Crazy  Coqs, a stunning concert version of Carousel from New York’s Lincoln Centre , a Brighton- based gem , Four Thieves Vinegar from Brighton Fringe and some medieval treasures from Brighton  Early Music Festival, and the beautiful dance drama Wait For Me.

BBC iplayer gave us new versions of Alan  Bennett’s classic monologues Talking Heads, and the clever and poignant Staged with a locked-down David Tennant  and Michael Sheen – due for a new series in January.

Streaming also gave us the classic LGBTQ+ drama The Boys In The Band, the new and quirky Hollywood, with Patti Lupone and from  his back garden ex-Blue Peter’s Peter Duncan  gave us an enchanting Jack and The Beanstalk . And there was a wonderful documentary Circus of Books about the iconic LGBTQ+ bookshop. Lesbian awakening musical Fun Home was new to me as was queer writer/performer Neil Bartlett’s reinterpretation for radio of Camus’  The Plague. Plus Julie Andrews’ last stage  starring role in Victor  /Victoria  was electrifying .

On film there were gems  from the Iris Prize Festival – still on All4-, including  heart -warming trans and lesbian stories  – and from the wonderful Peccadillo Pictures lots of treasures, including And Then We Danced about queer love in the Georgian State Dance Company, and Boys On Film 20, as well as the mainstream Monsoon about love and identity in Vietnam. New Queer Visions also continues to astound and delight with its film collections.

Emerging LGBTQ+ performers were centre stage in my continuing series of feature interviews and they also appeared in the sad/funny streaming Distancing  , and the Grass Is Always Grindr – and a future awaits the likes of Kane Surry , Alexis Gregory, Denholm Spurr, Elliot Hadley , drag king  LoUis CYfer and bi comedian Sian Docksey . Watch this space for more interviews in 2021.

My thanks to all the performers I saw this year, in whatever medium and especially to my interviewees,  including playwright Jonathan Harvey, bookshop legend Jim  MacSweeney, theatre director Andrew Beckett , and all round theatre man Tim McArthur.

I’ve covered a few stunning lesbian and trans offerings – mostly on film ,  but very few  of them  and I’m hoping for more  in the coming year.

Our LGBTQ+ choirs have been working hard in lockdown and it was great to see a virtual concert from  the Rainbow Chorus and a live performance from the Actually Gay Men’s Chorus at year’s end – here’s hoping all the choruses are back in 2021.

There are many unsung heroes in the theatre world , but here’s a little tribute and thanks to theatre publicist Kevin Wilson who’s allowed me to laugh and cry and applaud this year of all years.