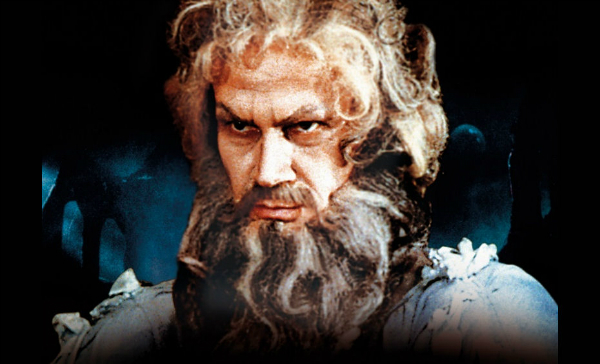 Verdi’s haunting and melodic chorus of the Hebrew slaves follows the plight of the Hebrews as they are forced from their homeland into exile by the Babylonian King Nabucco is the best known part of this powerful tale which is laced with revenge, destruction and jealousy.

Verdi wrote Nabucco as his liberation opera, Italy was struggling with liberation at the time and the ever timely Ellen Kent has brought us this classic tale of a people, enslaved by a foreign power and god, wrestling themselves free and bringing the wrath of god down on their oppressors. It’s an opera all about identity, exile and change with some heavy romance thrown in to lighten the story and Kent brings it to the stage with a lively bounce, focusing attention on the drama and allowing the sometimes pedestrian music to support the action on stage. It crossed my mind that it’s the opera for the Brexit voter…..

It’s always lovely to have a live orchestra in the Theatre Royal, and without them being sunk in the pit;  it gives a real intimacy to the performance. The spry orchestra conducted by Nicolae Dohotaru with a verve and passion which kept the music just right, not too sweet and avoiding the plodding demands of Verdi.

Iurie Gisca as Nabucco wove his lyrical spell across us and dealt with the blows and madness of the part well, supported by Liza Kadelnik as his daughter Fenena who was as pretty as her voice, all charm and sweetness. Olga Perrier’s Abigail, however was a perfect foil to this honey she was wickedly delicious, all power crazed and glamorously lethal, like a glittery viper and appeared as a sweetly dangerous raven headed Joanna Lumley. Her voice reached and dropped with equal vigour and Perrier kept the audiences attention and the narrative tension throughout.

For me, by far the best voice was Vadym Chernihovskyi his supremely deep bass and complex voice filling the theatre with grace and, for one so young, showed a seriously accomplished reach of emotive shading.

With some charming walk ons by local young people and children from The Theatre Workshop this was a lovely engaging opera presented in Ms Kent’s trademark way, lot’s of drama, quality singing and an intimate feeling of seeing good opera done in a straight foreword way.

Ellen Kent has been producing Nabucco since her very first show and she knows what her knowing audience want. The classics served up with no mucking about with, as the composers first commanded and with the melodies as rich and familiar as a roast Sunday lunch, and with all the trimming of the theatre on the side. It’s a spectacular traditionally staged production featuring magnificent sets and costumes with some clever lighting and stage effects.

This was my first Nabucco, regular readers will know I’m no fan of Mr Verdi, but Kent’s animated version kept my attention from the off and I enjoyed this authentic production and a very cozy evening in the Theatre Royal