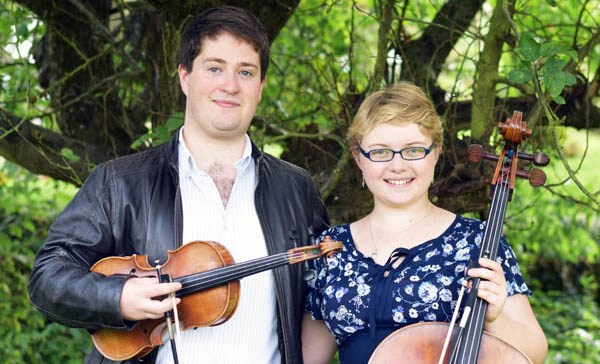 Winner of the Celtic Connections Danny Kyle Competition, Fiddle & Cello duo An Dhá bring their unique blend of Celtic music and Jazz to the Brighton Fringe.

Recently described as “very impressive” by BBC Radio Scotland’s Bruce MacGregor, An Dhá are taking the Folk world by storm. After winning the London Fiddle Convention Competition in 2016 they did not expect to also win the prestigious Danny Kyle Competition earlier this year and join the ranks of past winners such as Rura, Breabach and The Chair.

Jaya Hanley, An Dhá’s Fiddle Player, said: “Winning the Danny Kyle Competition was an incredible experience. It is such an honour to be following in the footsteps of some of the Folk music greats; it is so exciting to be on the cutting edge of contemporary Celtic music. The cherry on top is to be able to play beautiful music with my fiancée.”

After several popular performances in the fringe festival last year with their ‘Highly Recommended’ (Fringe Review) show Urban Folk Music An Dhá’s new show Supertigers will explore what it means to play traditional Celtic music and infuse it with Jazz. An Dhá will be playing four shows at the Brighton Komedia and three shows at the Brighton Buddhist Centre during the festival.

Traditional music power couple Jaya Hanley and Sarah James started exploring folk music together in more depth on the Isle of Skye in 2013. An Dhá means ‘The Two’ in Gaelic.