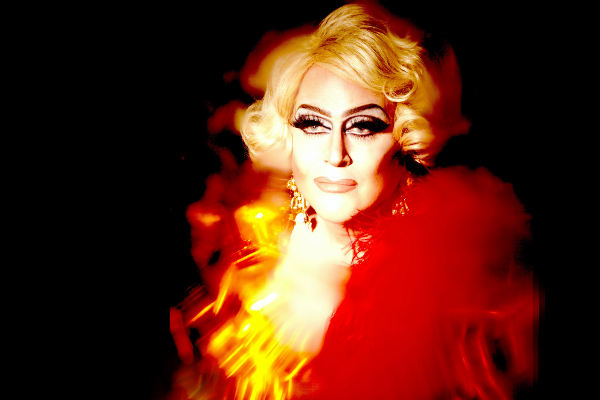 Ty Jeffries has two childhood  strands of memory about performing . Firstly he recalls his actor/director father Lionel at home learning scripts or being on film sets with him  in England and Hollywood.

The second is equally remarkable – his own musical career – becoming a musician at age 5 and attending the prestigious Purcell School of Music aged 13. Not only was he studying piano and composition but also writing songs – with his first commercial contract being signed when he was 14.

Thwarted in his desire to go to RADA , he took a degree  in Music and Drama at Middlesex University. Already fascinated with the likes of Garbo and Bette Davies, he increasingly became interested in the phenomenon of the “ failed diva” – the many we don’t know about who were talented but didn’t quite make it to the big time.

” They became more fascinating – the ones who slipped through the net,” he tells me. And so was born an idea that eventually became the sad clown that is Miss Hope Springs.

Ty’s early  foray in this territory was in 2008 when he performed Portrait of Joan – a homage to Joan Crawford. He’s keen to emphasise that he’s not a drag act. “ Miss Hope Springs is a woman when she’s onstage -people believe she’s a woman; when she’s offstage she’s gone ,” he tells me .

Indeed he has forged two very different but successful careers , as he also regularly performs as himself , playing his own compositions. Miss Hope Springs was also created to sing his repertoire – he never sings cover songs.

The irony of the diva act is that the audience can see that she’s really very good and the material is very good. “ She’s a victim of circumstance and very much a Broadway baby . She’s not bitter: she still thinks she can make it big.”

The hinterland – her back story  – is meticulously laid out. She may perform at the  Wigmore Hall – indeed she has , or in West End cabaret venues, but the “ reality “ is she goes home each night on public transport to a campervan at Dungeness, to live  with her ex-husband and his hairdresser boyfriend, Carlos. It’s wonderful self-effacing tragi-comedy.

And as Miss Hope would tell her audience: “ If the camper van  is rocking, don’t come knocking.”

After 10 years of performing as his invented diva , and winning the prestigious  Broadway World best cabaret award at Edinburgh 2019 , Ty decided that after Brighton Fringe this year Miss Hope Springs would retire . Then Covid hit and the decision was made for him. “ I needed to take some time off, I was running on  empty “ he says.

Lockdown hasn’t been as awful for  him as for many performers who have had  careers snatched away  from them , he admits. “ Now I feel I have to perform again, so I created a Christmas show for the Crazy Coqs cabaret venue in London ,”

Pre- second lockdown the one night show sold out and a second date was added, which at the time of writing may now not have a live audience – but more of that later.

Commenting on the lockdown Ty told me : “ it was a challenge, with no activities . I did a virtual performance at Brighton Pride and it was surreal, but Miss Hope Springs  imagined there was an audience in front of her. “

Asked if his career had the blessing of his father veteran comic actor Lionel Jeffries, he says ‘ He was conflicted. He was a friend of Danny La Rue and appeared in the West End in Hello Dolly with Danny, and he dragged up a couple of times. He turned me on to female impersonator Jim Bailey.” He promises he will tell the story of being a young gay man in his forthcoming memoir – but no more for the moment .

” The world has changed so much for LGBTQ+ people, and now especially for trans people . We do have to be vigilant : our rights are at risk – the rights we fought for ; they can easily be snatched away again . It is really happening in the USA  .”

Asked to give advice to a teenage Ty he says straight away: “ Run.. run away to be yourself, be adventurous and not give a ***** about what people think . I carry psychic scars of oppression .”

So what of the future ? “ I have lists of lists of things I want to do. I’ve got musical projects I want to see staged – either with Miss Hipe Springs or with someone else.” And he’s got shows booked through 2021.

Most immediately he’s got his Christmas Agogo !  show at the Brasserie  Zedel’s Crazy Coqs cabaret room on 11 December. You can learn more or book tickets here.

Whatever else happens, the resurgence of Miss Hope Springs and Ty’s songwriting mean that in the words of a song his father sang in the film Chitty Chitty Bang Bang “ from the ashes of disaster grow the roses of success. “