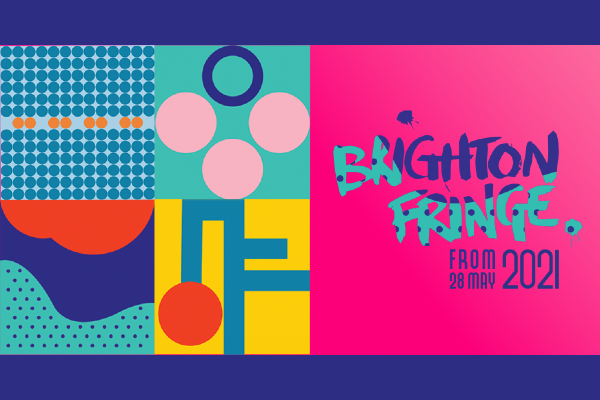 Some 350 events are planned in this year’s Brighton Fringe which will bring a massive boost to our lives from the end of May. Julian Caddy , Chief Executive told Scene some 70 venues would be staging shows, with over 130 events being online. The Fringe can boast 150 world premieres , he said.

Many events will be free, cost £ 5 or less , or on some occasions you can pay what you want/can afford.

Dipping into the online brochure for the season which runs from 28 May until the end of June, and in some cases into July, I found the following:

King Lear by Oddbodies – armed with a drum, a guitar, a knife and a chair, this irreverent one-man adaptation of Shakespeare’ s tragedy gives us the point of view of Lear’s Fool amongst other characters. Online event.

John Callaghan’s Cabaret Electro is billed as a Renaissance  man in a suitcase. “ If you want to put your brain in the blender, have a listen “. -Online event.

This Is Not a Solo Dance, by Yun Collective is a performance about what makes a woman, inspired by Chinese culture and calligraphy. Online event.

Tania Lacy – Catch A Falling Star – an Australian enfant  terrible of the 90’s has become  “ an enfant anything she wants “. Online event.

Spirit Of Africa by Tshwane Gospel Choir brings us the sorrows and passions of Africa. Online event.

Am I A Terrible Person? Is an autobiographical look at the stigmas attached to mental health, neurodiversity and the LGBTQ+ community. By Living Record productions. Online event. Alright, Girl? Is a soundscape recoding of Maria Ferguson’s debut poetry collection – a frank exploration of class, gender and belonging. Online event.

Mnquma by Xolisile Bongwana is a story of a man’s quest to reconnect to his roots and reclaim the legacy of his ancestors. Online event.  Beast In Him , by Masifunde’s Academy of Creativity, introduces us to 25 young people from Walmer Township who tell of the harsh reality faced by women and young girls who lose hope and give in to the tragedy of abuse by fathers and boys. Online event.

Jazz In The Theatre with Muneeb Hermans gives us Cape jazz from the foot of Table Mountain . Online event.

The Tragedy Of Dorian Gray , by Blue Devil Productions, brings us the swinging 1960’s in Chelsea. A young man prepares to have his portrait painted. His story of lust, vanity, fame and corruption takes us on  a twisted journey. Based on Oscar Wilde’s book. Online event.

Clean: The Musical Online tells the stories of the women of the laundry hill area of Brighton since 1870 – a rousing celebration of women’s resilience and sisterhood, including, topically, the smallpox outbreak of 1950. Online event.

The Great Gatsby ,  by The Wardrobe Ensemble , is a unique 2-woman retelling of F Scott Fitzgerald’s classic. Online event. A Brighton Dancing Discovery Tour invites you to dress up and prepare for an hour of fun, laughter and craziness as you walk/run through the streets of Brighton , stopping periodically to dance and take photos.

And yes, they’re back ! The Lady Boys of Bangkok bring us their Flight Of Fantasy Tour – their most outrageous, sassy show yet at the Sabai Pavilion.  Brighton-based composer/performer Ty Jeffries brings us his damaged alter ego Miss Hope Springs  in “ I’ve Been Around “, down on her luck and heavily medicated. Latest Music Bar.

The Spirit Of Woodstock is a lightning-fast tour  by Jonathan Brown  of  65  characters set at the time of the Mother of Free Festivals.  Witness the murder of Bobby Kennedy, the launch of Apollo XI and a submarine off Cuba . St Anne’s Well Gardens.

Look out for more details of the very best Fringe events, live and virtual shows with Scene

Tickets from brightonfringe.org from 14 April.