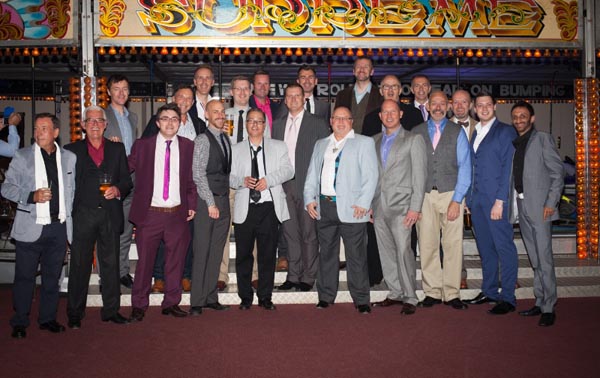 The Golden Handbag Show took place Sunday 23 June at the Brighton Metropole Hilton, with the winners voted for by readers of Gscene magazine.

“We are delighted to receive this award and I know it will mean a lot to all of the boys. There are lots of fantastic community groups in Brighton and Hove so it was a great honour to win! Our membership has increased to around 80 people in the last year, and each one of those members – with the musical expertise of our fabulous MD Marc Yarrow and Assistant MD Tim Nail – has worked so hard to make us the group we are today. I would also like to thank all of the people who voted us and hope to see many of you at our next show!”

“I’m delighted that the Chorus have been recognised with this award. I’ve worked with many different choirs before but what sets Brighton Gay Men’s Chorus apart is the fantastic feeling of inclusivity and support among the members. I also love that we are able to provide exciting musical opportunities for gay men in Brighton. It’s been lovely to help the boys flourish with fantastic achievements such as performing annually at Brighton Dome, recording a single and going to Manchester to win the 2013 Manchester Amateur Choral Competition. Thank you to all who voted for allowing us to add the Golden Handbag Award to that list, and well done to all of the other winners and nominees on the night.”

The award is more good news for the Chorus who were also the winners of the 2013 Manchester Amateur Choral Competition earlier this year.

The next chance to see the award-winning Chorus is in their forthcoming show ‘Brighton Gay Men’s Chorus: Taken From Behind (The Scenes)’, part of Brighton Pride Arts & Film Festival, on Friday 19 and Saturday, July 20 at St George’s Church, St George’s Road, Kemptown.

The show is billed as an exclusive look at what really happens behind the scenes of a Brighton Gay Men’s Chorus show, with lots of backstage shocks promised.