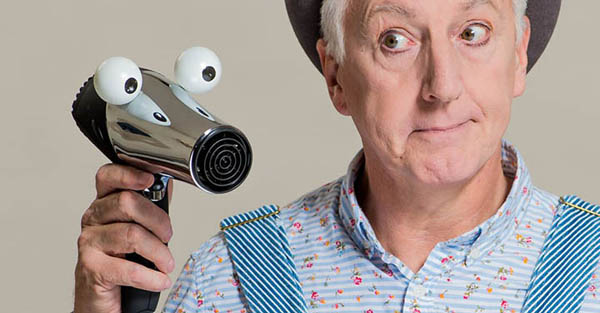 Krazy Kat Theatre Company present the World Premiere of OLIVER IN THE OVERWORLD by Albert Hammond and Mike Hazlewood.

This spring, the acclaimed Krazy Kat Theatre Company presents the world premiere of the first ever sign language musical for families. Oliver In the Overworld, a family show for three to six year olds, hits the road for a six week national tour from April 7.

Created by multi award-winning Artistic Director Kinny Gardner and featuring hand- crafted puppets, captivating song and dance and fully integrated sign language, Oliver In The Overworld tells the surreal, picaresque tale of Freddie, a little deaf boy who travels to The Overworld, The Land of Machinery. His quest is to seek the mechanical parts to mend the memory of his best friend Oliver the Grandfather Clock. Encountering a rich array of heroes and villains along the way, Freddie is on a mission and no one will stop him.

Freddie’s madcap musical adventure tackles the acceptance of old age, its associated loss of mental facilities and children’s abilities to assist in the resolution of conflict. It is also a colourful celebration of difference in both ability and social background.

With an emphasis on the highly visual, the work engages with many audiences whose first language is not English. This has led to invitations to festivals in Spain, Holland, France and Italy in addition to touring nationally throughout the UK.

Past productions include A Victorian Mikado, The Singing Ringing Tree, A Tempest with Nottingham Playhouse and Edmund the Learned Pig with The Royal Exchange Theatre Manchester.

Kinny was a member of The Scottish Mime Theatre for many years and is seen by both the Deaf and Hearing communities as a major innovator within visual theatre using Sign Language Arts. He has a wealth of experience from classical dance to mime, Kabuki to Comedia dell’ Arte and has performed in many shows including Godspell, The Rocky Horror Show and The Mousetrap in the West End and regionally in The Pirates of Penzance, Chicago, Marat/Sade, The Threepenny Opera, Assassins, and Cabaret.

Kinny is a principal guest artist with The Lindsay Kemp Company, with whom he continues to tour the world’s opera houses. His directing work has taken him all over the world and includes over 42 productions for Krazy Kat. He is currently a Development Adviser to BBC Cbeebies, working on new mainstream Sign Language television projects for children. His many awards include The British Empire Medal for services to the Arts and Disability.

Oliver in the Overworld is directed by Caroline Parker, designed by Chris de Wilde and choreographed by Darrell Adlridge with musical arrangements by Sam Somerfeld and stage production devised by Kinny Gardner B.E.M.