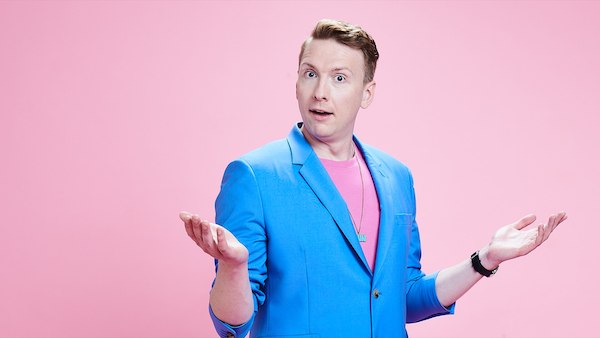 In 2021, Joe Lycett was due to host a queer Christmas house party for Channel 4, however due to rising Covid numbers, the event was cancelled. Now, it has been announced that instead, Joe will be celebrating 50 years of Pride in the UK with a big queer party, live from his Birmingham hometown as part of Channel 4’s Proud All Over programming.

Joe Lycett’s Big Pride Party will be a two-hour long inclusive extravaganza that will see the comedian and consumer rights warrior celebrating all things LGBTQ+, alongside a whole host of famous faces.

In a press release, Channel 4 explained that the show will be “full to bursting with Joe’s trademark wit, a barrage of naughtiness, and just a smattering of righting wrongs as Joe is joined by a dazzling line up of celebrity guests including Hollywood superstar Rupert Everett, Heartstopper sensations Joe Locke and Yasmin Finney, It’s A Sin’s Olly Alexander, comedian Mawaan Rizwan and Drag Race queens Lawrence Chaney and Tia Kofi.”

Confirmed to perform so far are Boy George, Steps and Self Esteem, with further announcements to be made soon. What’s more, comedian Rosie Jones will be out on the road, and Jen Ives will also feature.

“We’ll also be counting down the Top 10 LGBTQ+ TV moments and the specially invited audience – made up of LGBTQ+ icons, allies of the LGBTQ+ community, and local heroes – will be sharing their own personal stories of Pride.”

“As a straight white man who works in scaffolding, I’m not quite sure why I’ve been asked to host this????” jokes Joe Lycett.

Louisa Compton, Head of News, Current Affairs and Specialist Factual and Sport, who is overseeing Channel 4’s Pride season, said: “As a broadcaster who has proudly championed LGBTQ+ programming for 40 years, we are delighted to be marking the climax of our Pride at 50 season with Joe Lycett’s loud and proud celebration live from his Birmingham hometown.

“This isn’t just any party – it’s a Pride party with purpose – and whilst we’ll be celebrating all that’s been achieved we’ll also be calling out where progress has stalled across the world. Watch out for some very noisy and exciting stunts.”

Joe Lycett’s Big Pride Party will air this summer on Channel 4, during the month of July – according to a post on the comedian’s Instagram – however, an exact date is yet to be revealed.

Until then, why not find out what happened when Scene caught up with Joe Lycett at the beginning of the year?