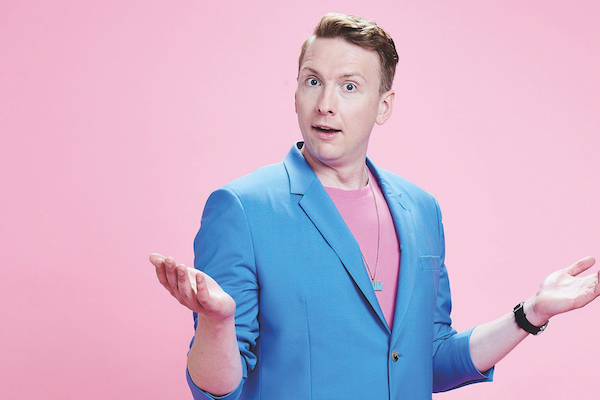 Comedian and consumer rights activist Joe Lycett was born in Birmingham and began his career as a stand-up comic in 2007. Growing up as a queer child in the West Midlands, Joe recollects his coming out experience.

“I was very upset when I told my parents,” Joe told Scene. “My mum was the first person I told in the family and then I spoke to my dad about it and he was really great. They were both really great but you know I was very nervous about telling them, and I wasn’t sure it was going to go well but they were wonderful.”

Older family members, however, had been raised in a different time and needed to shed their ingrained prejudices in order to accept Joe’s queer identity. “My grandad sort of said in this weird passing statement, he said that if he knew any of his kids were gay he would have drowned them at birth,” Joe reveals.

“It was such a sort of dramatic thing because he wasn’t a dramatic person and I remember being like ‘oh that’s weird’, and I hadn’t come out in any way at that point and then I got older and started doing stand-up and I never formally come out to him, but he completely changed his mind on that because he realised it was an old-fashioned view that he probably just picked up when he was a kid and it wasn’t actually what he thought.

It was just what he thought he should say. And all that came from the fact that he met me, and he saw me, and he loved me, and he knew that I wasn’t anything to be frightened of and there was nothing wrong with me and that he loved me as I was. So, representation is really important in real life, it’s important to meet people from different cultures, sexualities, genders, and backgrounds.

“I came out in sixth form and I think I was the only person in my school, in my year group, who was openly anything but straight,” Joe says. “There wasn’t any out-and-out homophobia, well there was probably a little bit, but generally it was just like ‘uh he’s weird’ rather than slurs or anything like that.

“What I’ve realised in more recent years and have found out is that there are a lot of kids in my year, a lot of people that were in my year that came out afterwards, and some who ended up in long-term relationships with people that they maybe weren’t happy with but felt that they had to, you know, be straight. And that is a real problem and a real travesty for those people.

“It [my childhood] wasn’t that long ago, but I really feel like you see the kind of young people now and the kids in school and how much things have progressed and I’m just so in awe of that and I’m so impressed by it, and obviously there’s still homophobia in schools but it’s way less than I think it was in my era and I really hope that continues to kind of f-off basically. It would be nice to know that in the next few years homophobia in schools doesn’t exist because then it won’t exist in those generations as they become adults.

“But I don’t know politically, I feel like we’re not going in that direction. I do worry about it a lot,” Joe admits.

At first, Joe “was quite scared of going to gay bars because I didn’t know what to expect, and then the first place I went was The Village Inn in Birmingham, which is now one of my favourite places to go.”

He continues: “I remember all my friends at school were straight and went to straight clubs, and I remember feeling like, god everyone’s a prick. Everyone was sort of peacocking and trying to make themselves look really cool, and I was like am I meant to do that? Is that what I’m meant to do? Then going to The Village, I was like oh this is just people genuinely having a good time and letting themselves go and being themselves, and that’s way better than this nonsense so I really ended up loving going to the gay village.”

After growing up in Birmingham, Joe left for Manchester University and continued going to gay venues in a new city. “I took my housemate to Canal Street one night,” Joe remembers fondly, “we just had the best time, so fun, so free and easy-going. The idea of going to a straight club fills me with sort of dread. I go to gay clubs all the time and have the best time, it’s a better place to be.”

Joe is no stranger to queer culture and was recently a judge of a drag lip-syncing competition in Birmingham called the Church of Yshee run by Yshee Black. “It’s a brilliant show. I went to watch the final last time round a couple of years ago and it was really good, the winner Black Peppa was extraordinary. But the standard this year has really stepped up and I think that’s because people have seen the possibilities for the artform.”

He also explains that he enjoys the rougher, less polished side of drag. “I think Birmingham and Yshee Black sort of embodies this. Birmingham drag particularly seems to like revel in and – Ginny Lemon and a lot of these other characters from around this area – really enjoy that kind of trashy drag. It’s not slick, it’s definitely not traditional ideas of beauty, I mean Ginny Lemon; the costumes that she wears are just jokes. They’re elaborate, beautiful, funny jokes.

“It’s a very funny artform a lot of the time and particularly the Birmingham stuff. What I loved in the first series of RuPaul’s Drag Race UK was how funny everyone was and how Baga Chipz was just so funny. That’s why I tune in more so, I’m not a huge connoisseur of fashion, for me it’s like what funny stuff are they doing and what performances are they doing?”

As well as watching live drag performances, Joe enjoys playing with the drag artform himself. “I keep coming up with drag names and can never land on one that I’m happy with,” he admits. “My friend Matt is brilliant at drag names. He came up with Elaine Closure which is a great name, also Emily Bank Holiday Sunday,” Joe says, explaining that if he had a drag name it would be a pun. “Fatt Butcher is a perfect example, they’re a friend of mine and they are very good.

“I performed, years ago, as Nigella Farage,” Joe continues, “where I basically dressed as much like a kind of bastardised version of Nigella as I could and did a load of sort of anti-European jokes while making a goat massaman curry. You know it needed some work, but there’s something in it.”

Joe will be performing (not in drag) in his new comedy stand-up tour across the UK in 2022 including London, Brighton, and Birmingham.