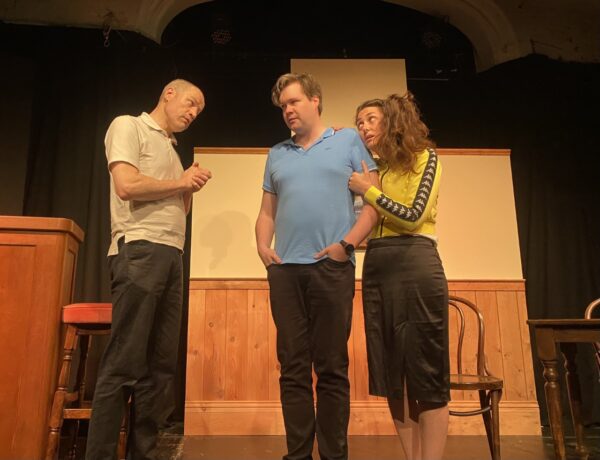 Geoff Smith is a world record-breaker, following in his mother’s footsteps. But can he persuade the Guinness Book of Records to verify his attempt? It’s a bit of a cliff-hanger which keeps us guessing for most of this play, along with whether Geoff will throw in the towel early and be dug up. Dug up? Read on.

It’s 1998 – Tony Blair is still having a political honeymoon as PM and the best mobile you can get is a Nokia or a Nokia.

Geoff walks into his down-at-heels local pub the Railway in woe-begotten Mansfield in the Midlands and makes an offer to landlord Spike. Geoff wants to be buried alive for 180 days in Spike’s  beer garden, with all the attendant fame and maybe fortune attached to such a bold attempt.

Spike leaps at the chance of getting more customers and also says he’ll manage the attempt and be Geoff’s PR person. And so starts an enchanting comedy, based on a true story, presented by three actors playing all the characters and an ingenious set that gives us a downward porthole view of the human mole.

Writers Brian Mitchell and Joseph Nixon have captured perfectly the absurdism of the piece and their working-class inflections of speech are perfectly delivered with relish by Duncan Henderson’s Spike and Murray Simon’s Geoff.

There are some quick character changes – especially for Emma Wingrove as Spike’s wife and Geoff’s two girlfriends who both dump him while he’s underground. Brian Mitchell’s slick direction keeps the action moving along at a fair old pace, and there’s a big sideswipe at the manipulation of ordinary folk by the tabloid media and the pomposity of News At Ten. There’s even the unseen involvement of arch-publicist Max Clifford, whose ending was of course the stuff of tabloid headlines.

It’s not spoiling it to say Geoff succeeded; you can Google the story, but this social comedy brings him to life in a clever and endearing way.

Underdogs by The Foundry Group is at the Rialto Theatre as part of Brighton Fringe until May 28. Tickets for this and other Fringe shows HERE