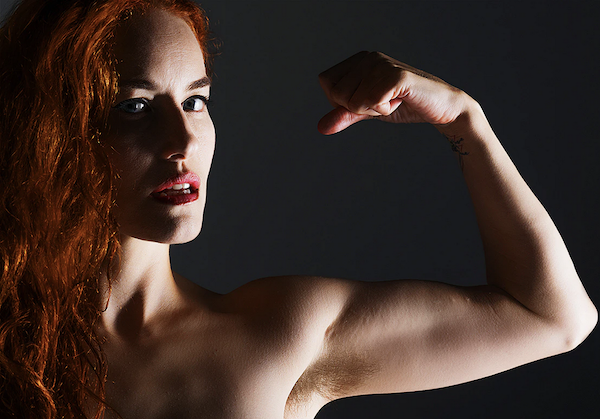 Rosy Carrick’s one-woman show is not for the faint-hearted or squeamish and probably not for men at all. Her message of ”be shameless, be truthful” comes at the end of a marvellous 70 minutes where she analyses the 1980s cult movies of Arnold Schwarzenneger and Dolph Lundgren and why they have stimulated her private orgasms for several decades.

Her true-life journey is a tale of sexual obsession, of failed boyfriend experiences, and though initially I found it shocking, Rosy is so engagingly funny and forthright that you have to warm to her subject matter – well if you have a penchant for gigantic muscles.

Her basic desire is to achieve sexual power in her own right as a woman, and she goes to extreme lengths, she tells us, to get what she wants.

At this point I was thinking that this was a clever fictional comic narrative – but then up come clips of her meeting. Dolph at a Comic Con event and even travelling at vast expense to Ohio to Arnie’s annual bodybuilding contest the Arnold classic. She puts some of her proposition to the effusive Arnie, asking him why such a hunk could be subjected to such punishment. His answer, which she doubts, is that we love the underdog, the vulnerable hero who conquers all in the end.

She even spends £500 to get a photo with the Terminator hero, and shows it to us. And here her arc of discovery collapses –  so she tries to move her sexual power from the private to the public realm and to support other women who may not realise or accept their lack of control over their lives and relationships.

If this all sounds heavy, well it isn’t because the highly polished, engaging narrative style works really well. She says this is a work in progress. If it is, it’s pretty well nearly there. I thought the concluding 15 minutes could have been telescoped a bit to make the denouement more powerful, but it’s a revelatory evening – to men and women alike.

You can find out more about Rosy HERE. Her show was at the Rialto Theatre as part of Brighton Fringe. More Fringe ticket information HERE