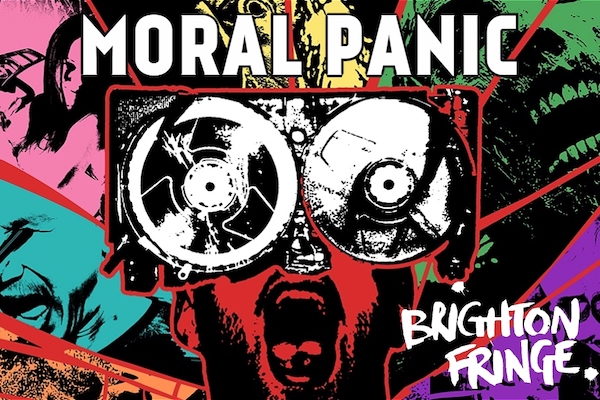 Jack W Cooper is just out and out brilliantly funny in this deeply dark comedy about film censorship and murder.

It’s 1984 – the year of the Brighton IRA bomb attack on the Grand, and Charles is a smug, bigoted, small-minded film censor but he has a heightened sense of morality that sometimes it’s hard to disagree with.

He leaves off watching all this horror and goes home to his boring suburban life, with his apparently boring wife Susan, whom he patronises – well because he can. When the Head of the Board of Film Censorship announces his sudden retirement due to ill health, Charles spies the career opportunity of a lifetime.

But will the sudden arrival of Veronica Nardelli as the new sexy, progressive censor rock Charles’ boat? What ensues is a nightmare scenario worthy of one of Charles’ worst video nasties. Murder  and mayhem – but who’s the killer?

Cooper plays the small-minded man with a small moustache, brilliantly, very reminiscent of Ony Fools and Horses‘ Boycie – but without the terrible laugh. He hits every nuance of Charles’ small small life, with comic perfection, turning out the laugh lines with exquisite timing – and he plays all the other characters too with a delightful variety.

If you see nothing else in Brighton Fringe, make this a must.

It’s on at the Conclave art gallery in Queen’s Road till Sunday, 22 May

Tickets for this and other shows HERE