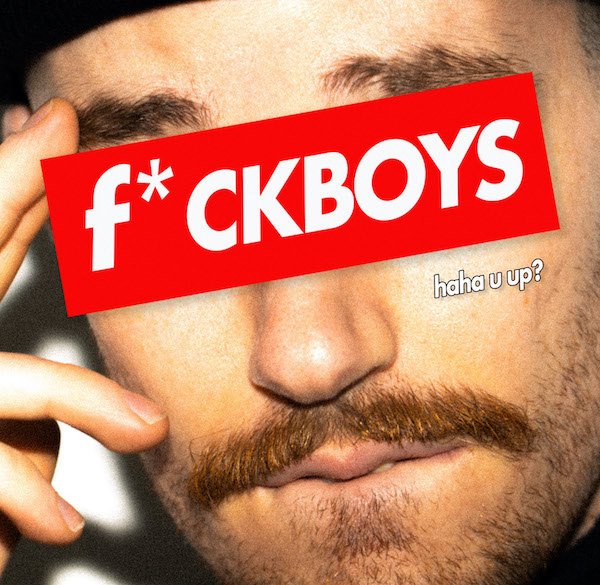 The provocative title of this theatre piece belies a thoughtful, sometimes funny, sometimes deadly serious,  examination of the testosterone-filled lives of boys becoming men.The verbatim-based but also improvised script centres round a quartet of guys -including one Queer, and one a straight skirt-wearer, as they recount  their previous sexual encounters.

The foursome – Leo Shepherd, Danny Mitchell, Mathias Amjour, and creator/actor Marshall Stay are engaging from the first few seconds when they chat to us and involve us in their games and stories.

It’s sometimes a truth or dare experience and sometimes a kiss and tell format. We get unrequited love, unconsummated love, tainted love, fictitious love and even love of fruit – well to be accurate sex with an orange.

Mathias is out-and-out Gay while Leo,though he has a girlfriend, is hooked on wearing skirts – first of all hers and then ones he buys. He also has the most heart-rending story to tell of physical abuse and torture, perpetrated on him by the girl he truly loves – it’s a shocking section of the show. He’s trapped, he tells us, because ”I’d rather her harm me than harm herself but really I’m scared to leave her and what she might do to me”.

It’s a clever, thought-provoking piece that is now going back into development with Harlow Playhouse and will come out on tour later in the year. I’d love to see how it grows and matures into a full-length work. In my view it begs for music as an element – we get a tiny bit of a capella singing from the boys and they sound great.

F*ckboys was produced by Izzy Edwards and Madison Parker for the 5 O’clock Club and was staged at the Latest Music Bar. Tickets for other Fringe shows HERE