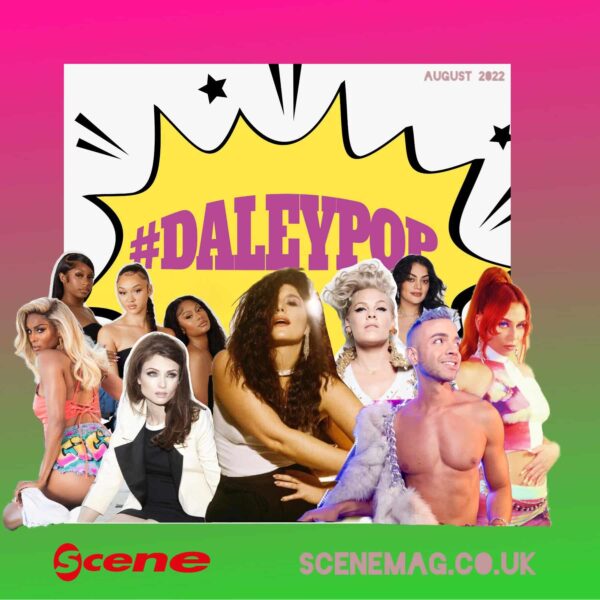 Jessie Ware’s new single, which is taken from her upcoming 5th album, feels like a celebration! Jessie said: “I’m so excited for people to have this song for the end of their summer; to dance, to feel no inhibitions, and to feel joyful because that’s how I’ve been feeling recently being able to tour again and sing again.”

Naww we love Jessie at Scene HQ! Free Yourself sounds like a classic on first listen with a powerful message which will always be relevant, and I can already hear it being blasted at Pride events for years to come.

Disco-pop Sophie Ellis-Bextor is back thanks to a collaboration with Glaswegian producer, composer and performer Wuh Oh. Sophie said: “Hypnotized is my favourite kind of wonky pop song. Fast-paced, melodic and has a kind of ‘what did I just listen to?!’ brilliance to it, too.

“There’s also a dance routine if you fancy. It’s a pleasure to collaborate with the very talented Wuh Oh and the song has been going down so amazingly when we do it live”. Thanks for another wonky BOP Sophie! And Wuh Oh!

Rhian! – I Need Your Love

Omg I discovered independent singer/songwriter Rhian! through an advert on Facebook (random) and checked out his song straight away because well, I’m always looking out for a new bop and I’m obsessed with pop music!

I loved it straight away and got in contact with Rhian! and he said “I Need Your Love is about the excitement, intensity and chemistry when two people who are attracted to each other lock eyes for the first time. It’s fun, it’s playful. I think everyone can relate.”

BTW it’s very house/disco and simply fab and makes you wanna go out, check it out! Not yet though, after you’ve finished reading my column 🙂

London-based Rose Gray gives me Madonna Bedtime Stories vibes which is PERFECTION and actually Rose said: “I wrote Synchronicity with Alex Metric in London a few months back,” and that: “Alex started playing with ethereal synths, and I was instantly in love with the soundscape we had created.

“It reminded me of Bedtime Stories by Madonna – one of my favourites. Lyrically I take you on a whimsical journey, completely losing myself and yet still feeling reassured by the power of human connection. I’ve always been fascinated by synchronicities.” YES YES YES!

Ciara is back, reunited with Coast Contra and ready to JUMP back into our lives. She tweeted: “I’m back on my mission to make the world dance.” And she’s giving Janet Jackson choreography vibes in the video, makes me wanna twerk right… now!

P!nk dropped a surprised new song inspired by the US Supreme Court’s decision to overturn Roe v. Wade. The day after Roe v. Wade was overturned P!nk tweeted: “Let’s be clear: if you believe the government belongs in a woman’s uterus, a gay person’s business or marriage, or that racism is okay – THEN PLEASE IN THE NAME OF YOUR LORD NEVER F**KING LISTEN TO MY MUSIC AGAIN!”

Eeeep, I love how outspoken P!nk is and always has been, and in her music too. Irrelevant is an anthem for right now.

Thelma Plum – When It Rains It Pours

Aussie singer-songwriter Thelma Plum is so slept on in the UK but she’s quite big in Australia! When It Rains It Pours gives Fleetwood Mac mellow vibes and is the perfect soundtrack for lazy hot summer nights.

“After far too much solo time spent in lockdown, I was sitting on my balcony watching my neighbours set up this extravagant looking dinner party during a classic Brissi downpour,” said Thelma about the new single. “I was lonely and missed my family terribly. I longed to be sitting around a table with them, but I wrote When It Rains It Pours instead!”

Well, EP of the month! I’ve been a bit worried that we haven’t got any girl bands left after Little Mix went on a break but now FLO are here to save the music industry YAY! We’ve got Sugababes back now but still waiting for new music…

FLO is made up of Renée Downer, Stella Quaresma and Jorja Douglas. The girls’ Cardboard Box single went viral on TikTok earlier this year and since then they’ve gained a load of fans, including myself, Leigh-Ann Pinnock, Missy Elliott and SZA. UK’s next big girl band incoming!

Immature is another bop and the harmonies at the end are lush! Summertime is a breezy summer anthem which, like all their music thus far, conjures feel-good memories of turn-of-the-millennium summers many moons ago.

The Lead provides plenty of nostalgia for the R&B-pop of yesteryear, a la Mya, Brandy, TLC and, of course, Destiny’s Child.