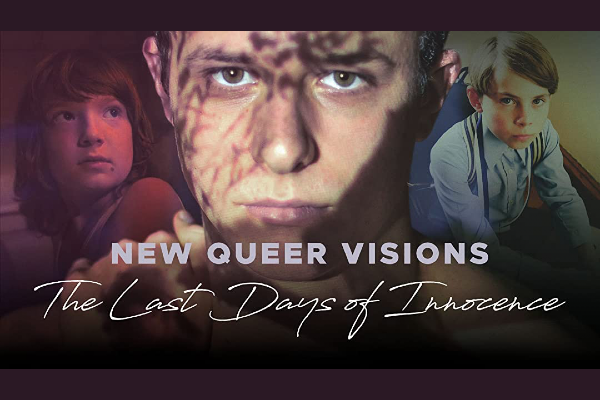 A new selection of short Queer films from the innovative nqv media presents us with young boys coming to terms with their sexuality in an enticing set of locations from the Swiss Alps to rural Macedonia.

In Ruins, we meet two mysterious boys in the wood – one running to avoid the searchlights of a group following him. The film stays with mystery – who is he and who is his friend ? Why are they in the back of an abandoned van? Is it just their feelings of growing up they’re running from? Who knows, but it’s intriguing.

Aline takes us to a remote Swiss ski resort out of season to meet Albin, a femboy who helps his mother with her cutting and sewing of curtains. But when he meets the older gardener Julien, he starts a dangerous and secretive physical relationship that is at odds with Julien’s butch male friends. It’s touching, beautifully shot in the mountains and promises further development as an interesting storyline.

Snake centres on 9-year-old Mario, who along with his boisterous playmates lives in a remote Macedonian village. When he encounters Queer dresser-up Borche, they strike up a relationship, not forgetting the older boy’s pet snake. But love sits very near to hatred and the close-knit family and community cannot cope with Queerness, especially when it’s manifested in a 9-year-old. It’s a story of violence, homophobia, inner beauty and forgiveness. Marvellously portrayed.

And finally The Touching deals obliquely with growing sexual awareness between two brothers, which becomes unacceptable in the eyes of their nearest and dearest. But it’s also a wonderful story of a young boy’s inventive imagination as he builds a model of the Titanic and attempts to sail it on a nearby lake. There’s a near tragedy, amongst the angst of growing-up and the film’s monochrome format gives it added distance and a feeling of yesterday.