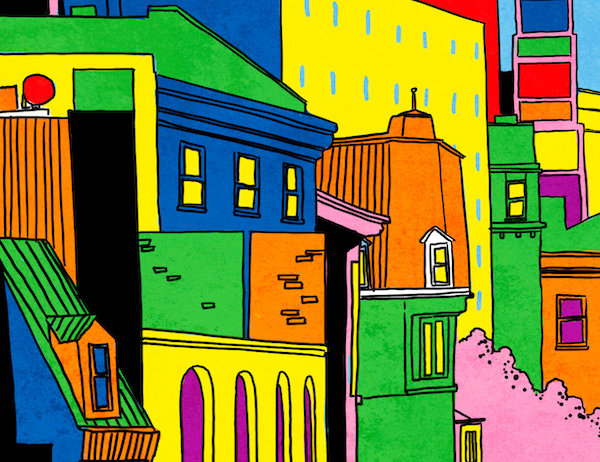 Fashion trends, like wearing the colour lavender, might give members of the community a way to express themselves and identify each other, but architecture can be equally expressive. Whether it’s the classic US college campus or some of the UK’s most historic National Trust buildings, queer landmarks are without a doubt everywhere⁠ – you just might not know what you’re looking at.

LGBTQ+ people have given us some of the most iconic design trends and historical buildings still standing today. From the legendary John Beresford Fowler mixing Georgian furniture, French painted pieces and rejuvenating old English manors, to the renowned textile designer Angela Gidden who creatively combines romance with risk. Safe spaces like gay and lesbian bars also provide valuable architectures where we can be ourselves and celebrate one another.

Queer legacy is all around us: Here are our top historical architecture and design trends you didn’t know were started by LGBTQ+ community.

Both in the UK and across the pond, gothic architecture has its roots in the queer community. Across both continents, the gothic works of art provided striking architecture and a visual outlet for lavish adornments and quirky styling – think black accents, wood panelling, and dramatic, deep-coloured prints.

William Beckford and Horace Walpole are two well-known instigators of the gothic trend in the UK, dating back to the late 1700s. While Beckford built his Fonthill Abbey with a terrifyingly tall 276 feet gothic tower that although doesn’t stand, still inspires artists today. Walpole’s, in contrast, valued dreamy vaulted ceilings and rose windows. Strawberry Hill House, built with his close friend John Chute, boasts stuccoed battlements and cathedral-like features that enticed the English aristocracy for exclusive visits. The gothic trend took off and continues to be revived today.

Meanwhile, in the US, the gothic revival of the late 1800s infiltrated college campuses for the rest of the century and continues to provide a back-drop and inspiration for many a high-school horror flick (think Scary Movie). While you might first picture the classic heteronormative couple of jock and cheerleader when you think of US colleges, their iconic backdrop was started by a gay man.

Interior design itself is a trend arguably started by a gay woman. In the early 20th century, New York socialite Elsie de Wolfe spurned a whole industry. With notable clients including Wallis Simpson, Cole Porter and George Bernard Shaw, Wolfe has been recognised as possibly the first interior designer.

Wolfe is most noted as responsible for encouraging a paired-down and bright look into her clients’ homes, ridding the city of its heavy Victorian vibe.

Well-known for her passion for abstract prints and geometric patterns, LGBTQ+ designer Enid Marx was commissioned to design fabric for the London Underground in 1936.

Her instantly recognisable designs were applied to seats on the network’s trains and buses and continue to be familiar to and inspire Londoners today.

Modernism is a minimalistic trend from the early 20th century. It’s also a design and architecture trend that the LGBTQ+ community has widely spread. In addition to glamourising the London Underground, Enid went on to spread the minimalist trend by designing fabrics for the low-cost furniture company, Utility, in the post-war years.

From functional insides to outside modernist architecture—the minimalist look made an impact. The Glass House by queer designer Philip Johnson is one example of how the LGBTQ+ community has played with architecture on a psycho-sexual level, at once both an exercise in voyeurism and a retreat for a close community of LGBTQ+ friends. If you’ve ever thought about wanting more windows in your home you’ve definitely been influenced by Johnson’s designs.

Johnson was a vanguard in his use of glass and went on to design the AT&T and Seagram buildings in New York. His work popularised the international style of strict, rectilinear architecture now seen in cities worldwide Still, he competes for the title of ‘father of skyscrapers’ with another member of the LGBTQ+ community, Louis Sullivan.

The brains behind the iconic Bayard-Condict Building – and many other innovative buildings that shaped New York’s skyline – Sullivan’s work laid the foundations for even more ambitious projects such as the city’s infamous ultra-luxury development, Billionaires’ Row.

With LGBTQ+ voices becoming more widely heard and accepted globally, the definition of what is defined as ‘queer architecture’ will become harder to answer. In the meantime though, we can appreciate the work of the people that paved the way for us.

Interior design as a profession was one of the first in which LGBTQ+ people claimed power and found a safe space to project their vision and talent to the culture at large. Their ability to test the status quo with curious creations continuously inspires modern artists, and 2023 awaits to see what the community has to bring.