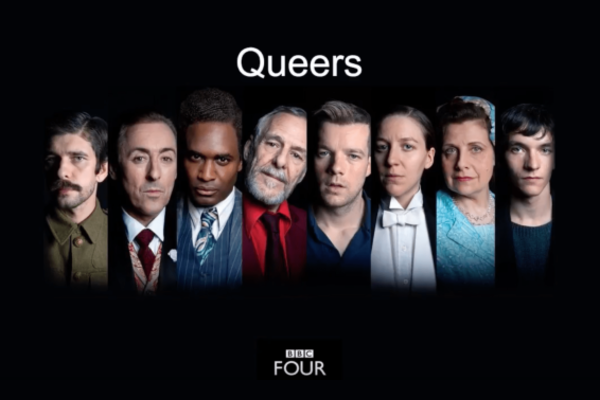 The joy of cruising BBC iplayer is that you can find stuff you either missed, forgot or never knew about. I’ve just hit a Queer purple patch with 3 sets of very different programming that are all stunning – be they fact or fiction.

First off, Against The Law is a hybrid of a dramatisation of a true story interspersed with interviews with Queer men  who recall the period in which it is set -the early 1950’s. Daily Mail journalist Peter Wildeblood ( played sensitively and with great emotion by Daniel Mays ) is in love and having sexual relationships with a young serviceman Edward McNally. But this is 1952 and their activities in the privacy of Peter’s flat are illegal.

We see a later Peter typing up his book of the events and he tells us:” Any man who takes a criminal path should be mindful of the consequences”. In this different time some Queer men viewed the illegality of their sexual activities as exciting , being underground- literally sometimes – avoiding the police. As one of the interviewees reminds us – if you were arrested for such so-called indecent acts, your name and address was revealed to the newspapers and you were almost certain to be fired from your job.

Peter’s story is quite complex but suffice it to say that his serviceman lover, to avoid imprisonment, implicates Peter as well as Lord Montagu of Beaulieu. Evidence is embellished or invented and the result is prison. If incarceration and public disgrace were not enough, the authorities offered aversion therapy. Peter tells us: “ All the things that defined me as a man evaporated. I couldn’t be who I was so I had nothing- it destroyed my personality”.

Peter Wildeblood was the only openly Queer man to give evidence to the Wolfenden Inquiry,which in 1957 recommended that homosexual acts between two men in private be de-criminalised. It took the Government 10 years to agree. It’s a gripping watch and shows that though things are far from perfect in 2021 , just how far we have come.

In 2017, to mark the 50th anniversary of the Sexual Offences Act, Mark Gatiss directed and  produced a series of 8 monologues which show the joy, angst, fear and guilt of Queer life.

Ben Wishaw is a soldier home from the front in World War I with a touching tale of a Queer romance that might have been. Fionn Whitehead is a protestor on the night of the vote that might have equalised the age of consent for same-sex activities to 16, but didn’t.

Russell Tovey is an actor who just wants to play the roles he was meant for, and Rebecca Front is the wife of a closeted Gay man, coming to terms wonderfully with the arrangement. Ian Gelder is an outrageously camp tailor recounting his sexual adventures during the blackout in World War II. Kadiff Kirwan is a West Indes immigrant caught up in the jazz life of Soho in the same period and a shocking life-changing incident.

They are all gems of dramas , touching, heart-warming and educational.

And third in my pick is a series spanning  20 years – A Change Of Sex. George is 24 and a catering manager in a mental health hospital. By night he is a lip-syncing Drag act in Fleetwood near Blackpool. But George wants to be a woman and he embarks, as the camera crew follow him, on an amazing journey to fight for and get sex-change surgery.

The series starts in 1979 and ends in 1999.The most shocking sections of the series of 5  programmes are George- now calling herself Julia and full-time dressed as a woman – and her encounters with a dreadful, pompous, ignorant NHS psychiatrist who is the gateway to her surgery. His attitude, behaviour and arrogance have the oppose effect on Julia, making her defiant, positive and determined.

The series made by David Pearson, had a staggering 9 million viewers when first broadcast. Sadly the surgery proves ineffectual and when an A and E Department fail to recognise what her subsequent bleeding is caused by, they appear to have inadvertently prevented any further chances of corrective surgery.

There are more twists and turns about her condition and she does seem genuinely happy by the end of the series, reconciled to how she is and happily partnered, though of course in those days not able to marry the man of her dreams.

Julia Grant was a true pioneer in transitioning and it’s a wonderful story of someone overcoming endless problems to be who she truly wants to be.

All these programmes are on BBC iplayer – Happy viewing !