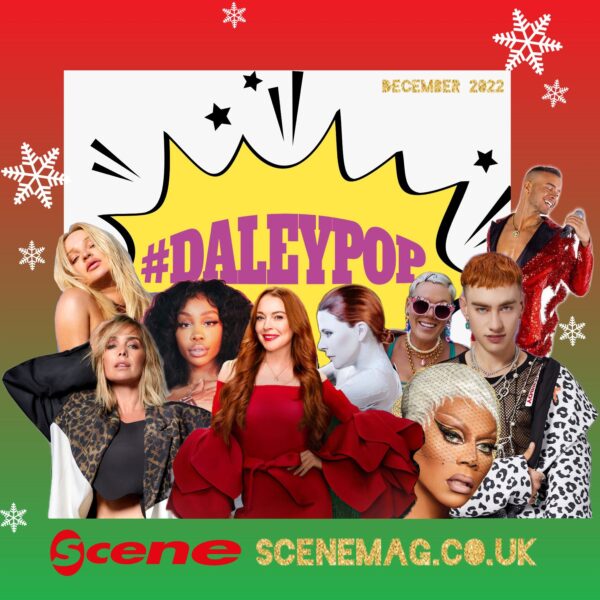 Music has been embedded in my life ever since I was in the womb, my Mum and Dad basically raised me on music, especially POP music! I grew up listening to Madonna, Mariah, Kylie, Spice Girls, Britney… even AQUA! I love sharing my favourite songs and album every month with you all from Scene magazine HQ! Follow me on Twitter @DaleMelita and Instagram @itsdalemelitabitch and here’s your #DaleyPOP playlist for this month! Oh and a very happy little Christmas to you… AND YOU!

OMG Christmas miracles actually do happen! Lilo has finally given us the best Christmas present ever – her own version of Jingle Bell Rock (my second favourite Christmas bop after Mariah’s, obvs) like 18 years after the classic Mean Girls!

She’s back on screen too in this cosy Christmas film, which will now be added to my list of ‘must watch’ Christmas films every Christmas. Sorry I keep saying Christmas BTW, I’m feeling festive already.

Wooo, P!nk is back and back to her best with her new uplifting and infectious single with such great lyrics like “I want my life to be a Whitney Houston song,” taken from her upcoming ninth studio album TRUSTFALL out in February.

Oh and did you catch her AMAs performance?! It’s on YouTube if you didn’t but she literally roller-skated into the AMA’s and made rollerskating and singing look so effortless and easy peasy and I’m still not over it!

RuPaul – Show Me That You Festive

YAY another new Christmas present for us all, this one from Mama Ru and it’s a sleigh (pun definitely intended). I’d say Mariah would be shaking in her little space boots but she’s the Queen of Christmas so she’ll be chilllllled.

Louise Redknapp has dropped Super Magic, which is a slinky ’80s-esque bop. Louise tweeted: “This is my most favourite I’ve released so far!” and I’m obsessed personally, definitely Janet Jackson vibes.

Oh also, Louise has just signed a new contract with record label BMG (YAY) so surely that must mean even more new music on the way?! Welcome back Louise 😍

PS: if you’re reading this, just to remind you, you were fab at Mighty Hoopla in the summer and thank you again!

One and a half years later or maybe even two years later, Shirt has finally arrived (basically SZA posted a snippet on Instagram in 2020 and then the snippet went viral on TikTok) but now she’s released it in all its glory and it was worth the wait IMPO.

She even teases another new song at the end of the video (which sounds lush), I’ve got a feeling in my waters that 2023 will be SZA’s year and hopefully… a new album? manifesting

Kim Petras – If Jesus Was A Rockstar

Kim Petras released her first solo single since her hugely successful duet with Sam Smith (read my review for Unholy here if you missed it: https://www.gscene.com/arts/column-its-daleypop/) and it’s bit of a different sound for Kim-“No one’s heard anything like this from me before. Gay club music was always my shit before, but now everyone is doing that, so where’s the excitement? If I did it again, it would just be boring.”so now Kim’s decided to “sing about something deeply meaningful, something that I struggle with and something that is just honest.” oh and it’s her first ever solo song without controversial Dr.Luke on the credits which will make most fans super happy!

Olly Alexander aka Years & Years has taken us back to the ’90s with his cover of one of the best dance songs ever and has given it a new lease of life. Olly: said “Crystal’s vocal on the original is so captivating, she has such a special energy and that really inspired me when I came to record my vocals. I’m really hoping people enjoy it, it has such a positive message and liberating feel to it, I love it!”

We love it too, 100% pure love from Scene x DaleyPOP HQ heheheheheheh.

Rhian! – Be My Baby This Christmas

This month’s Scene cover star Rhian! understood the brief with his first ever Christmas song! Definitely bringing fun, warm and excitement of the holiday season. Rhian! said: “I love Christmas and because I love Christmas so much, I wanted to create something that had a timeless feel to it.

“It’s upbeat and fun but it also touches on that yearning and longing for love. A lot of people are alone at Christmas time, so I wanted to acknowledge that. I was very inspired by the Motown sound of the ’60s and the Christmas albums of that era”. Read the full interview in the December issue of Scene and stream this festive bop!

I’m so excited to enjoy a new Mylène Farmer album in real time for the first time – like I’ve said before I discovered Mylène last year when I met my partner and he’s like so obsessed with her! She’s basically the Canadian-French Madonna and is one of the most successful recording artists of all time in France with over 30 million records sold, a huge discography, epic music videos and live clips.

Right let’s get to the album – Mylène’s 12th, which is currently on course to hit number 1 in France! At first I was like meh butttt it’s a grower, and who doesn’t love a grower? Every time I listen to it I love it even more and as soon as it finishes I want to listen again, it’s very dark and moody, cinematic and… dramatic, even a bit Goldfrappy.

Invisibles is the perfect intro for the album although I think it could’ve been half the length, for some reason it feels really long even though it’s only 3 minutes and 35 seconds. Check out my first review of the second track À tout jamais (Forever) HERE

My favourite on the album right now is the title track L’Emprise, which translates as The Influence (thanks Google translate), but my favourite does keep on changing depending on my mood.

Do You Know Who I Am makes me want to cry and cry. Rallumer les étoiles (Rekindle the Stars) is simply beautiful, while Rayon vert (Green Ray) (with AaRON) is delicious and gets better with every listen.

I also love Ode à l’apesanteur (Ode to Weightlessness) and Ne plus renaître (No Longer Reborn), which is an epic and 6 minutes and 6 seconds long but I wouldn’t mind it being 20 minutes long! D’un autre part (On the Other Hand) will be amazing live and I’m keeping my fingers and toes and eyes crossed Mylène performs this on tour next year!

Bouteille à la mer (Bottle in the Sea) rounds off the album – it’s the only real bop here, but overall the album is just… magnifique (gorgeous) 🙂