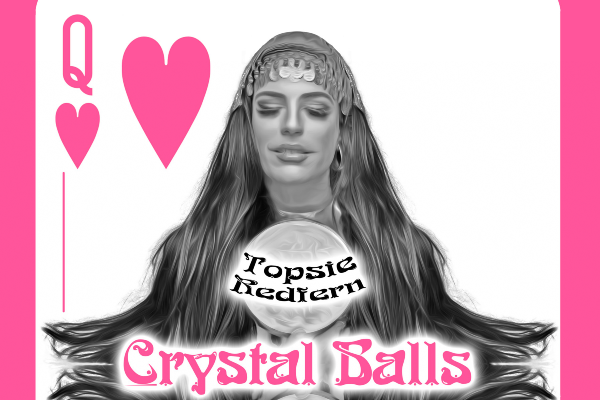 Topsie Redfern and her alter ego Nathan Kiley perform an amazingly frank  and honest journey through their lives as part of Brighton Fringe.

Nathan made his West End debut as Little Mary  Sunshine in the hit musical Chicago but in this show he is playing himself as he puts it, as a “ shiny girlie /boy “.

The performance has all the glitz you’d expect from an accomplished drag artist, but what we get in its  2-hour running time  is an insight into Topsie’s origins as a child of Irish traveller heritage .

And at the heart of the  story is a quest to find out more about great grandmother Winifred who toured the travelling fairs as fortune teller Madam Olga. And there’s a lot to find out, entertaining and educating us in equal measure , comparing the oppressed minority of travellers with that  of the queer community and drawing lessons we can all live by.

If that all sounds very worthy, don’t worry – it’s a fabulously entertaining and upbeat journey that Topsie/Nathan takes us on – from his 8-year-old queer self in the attic of his home, to the revelation  that Olga told the fortunes of not only first woman MP Lady Astor but also of Enigma code breaker and queer icon on our £ 50 notes Alan Turing.

And there are songs aplenty to break up the story and also underline it – from Mary Sunshine’s There’s A Litle Bit Of Good In Everyone, to a great morning after the one-night stand comic song Leave.

We get Irish ballads, and  for good measure , I Think I’m Going To Like It Here from Annie and my favourite the deeply moving Streisand classic A Piece Of Sky.

What we’re shown is a true celebrity with a deep sense of who he is and where he’s come from.

And the show is also taken one step beyond very good by the magic keyboard playing of Connor Fogel. The show is co-created and directed by Sarah Chew

Crystal Balls is at the Curzon pub theatre for  3 further performances on 23 , 24 and 25 June and then on tour