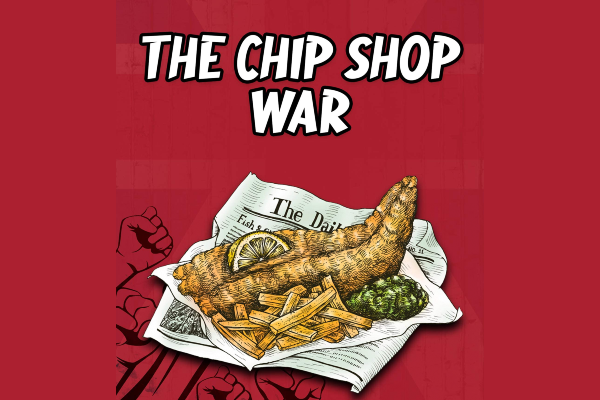 Book three of the Doreen Potts saga. Older readers may remember Doreen and the Potts family from Gay Times and  Sanderson has continued his delightfully comic character  and their extraordinary family. Imagine Doncaster of the 1990’s, yeah grim!  Equal parts comedy, biting social satire and examination of small-town snobbery, the failed dreams of romantics and the ability of a family to pull together in hard times to find new ways of being and belonging it’s a fun, light read.  Rooted in a gritty reality of repossession, rehousing and the struggle to claw yourself back into the place in society you think you deserve the book allows Doreen and the rest of the Potts free reign the world they find themselves cast into and when eventually re-establishing themselves, quite how out of depth they really are.

Using the battle of established against new chip shop, Sanderson spears his favoured subjects, he’s a queer expert on the UK national press and they get a marvellous kicking here, he drags a sacred cow or two onto religious alters and sacrifices them for our pleasure, and turns his rapier eye on the way television likes a willing working-class family to exploit,  but amongst all the hard satire and cynical spot-on observations of the contradictions of English social climbing there’s a heart of gold. It’s here that Sanderson’s keeps the Chip Shop Wars on track, by giving this monstrous matriarch unconditional love which gets her and the rest of her brood though the roughest of times.

Love them or loath them you root for them to the very last page.  Sanderson is our very own Queer Tom Sharpe, and serves up thick deep fried pure Northern farce, battered with crisp satire, served with a generous sprinkling of his tart vinegar wit.