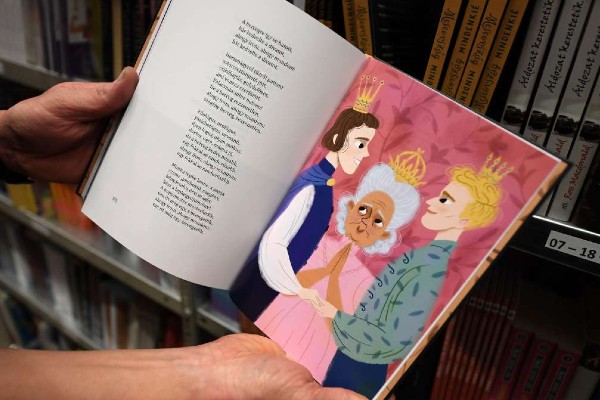 The publishers of Hungarian children’s book, Meseorszag mindenkie or  A  Fairy Tale for Everyone, which reimagines traditional fairy tales with characters from diverse backgrounds, has been ordered by authorities to add a printed disclaimer to highlight its ‘controversial content’. Although the majority of stories in the book do not explicitly mention LGBTQ+ equality, the Hungarian government argued it portrays “behaviour inconsistent with traditional gender roles”, and therefore legally requires a disclaimer for it to remain on shelves.

According to the Guardian, the authors said the book intends to ‘teach children to be respectful of people of all backgrounds’, but the government labelled it LGBTQ+ ‘propaganda’. The government office released a statement saying: “The book is sold as a fairytale, called so on its cover and designed accordingly, but it hides the fact that it depicts behaviour inconsistent with traditional gender roles.” The order extends to other books published by Labrisz, an association for LBT women, which contain queer themes.

Viktor Orban, the anti-LGBTQ+ prime minister of Hungary, openly condemned the book last year, saying: “Hungary is a patient, tolerant country as regards [to] homosexuality. But there is a red line that cannot be crossed, and this is how I would sum up my opinion: Leave our children alone.” The deputy leader of Hungary’s far-right Mi Hazank party also referred to it as “homosexual propaganda”.