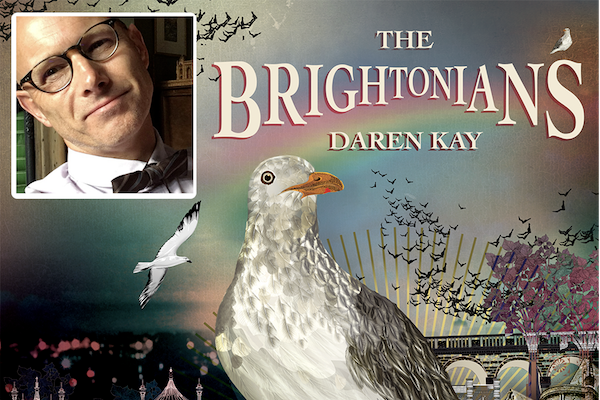 Bitter rivalry, social one-upmanship and a showdown involving a secret past life come to a climax in Daren Kay’s new novel The Brightonians, which has just been published by Grosvenor House Publishing.

The book, which is Kay’s debut, is billed as a deep dive into the lives of a group of socialites vying for supremacy of their circle. When one of them discovers a 50-year-old letter belonging to a local drag queen, their sparring is catapulted to comical new heights.

Initially leading to them back to Brighton in the Swinging Sixties, what they ultimately discover is even more shocking – connecting one of them to the past in ways that no-one could have imagined.

Kay says the novel is inspired by his experiences of gay life in the seaside city over the last three decades. He has spent the last few years excavating Sussex’s LGBTQ+ history for Brighton Museum’s Queer the Pier exhibition, uncovering a wealth of salacious real-life stories along the way. It is this journey, and his love of the Tales of the City series by celebrated US author Armistead Maupin, that has resulted in The Brightonians.

“There’s a fun phrase among queer people that ‘all roads lead to Brighton’ and in many ways, it’s true,” says Kay. “This city is a wonderful treasure trove of stories, and these are often at their most risqué, moving and historically fascinating within the LGBTQ+ community.

“Brighton has an incredibly rich queer history and I wanted to capture the essence of that in this novel, exploring how the past can catch up with the present and have a significant impact that’s as touching as it is comedic.”

Kay says that people who have read The Brightonians come out the other side feeling like they’ve made a new group of friends, with many noting how easy it is to get to know – and fall for – the characters.

“I truly believe that real, everyday people can be the funniest folk around. It’s fascinating to observe people milling around the city and imagine their stories,” Kay continues. “I hope I’ve managed to squeeze familiar traits of the eccentric, the fabulous, and the often unsung heroes of the LGBTQ+ community into the pages of The Brightonians.

“These tales, these characters and these places have been a big part of my life for the last few years and I’m excited to now set them free.”

The Brightonians, published by Grosvenor House Publishing, is available at good bookshops in Brighton including City Books, at Brighton Museum, at art gallery Paxton + Glew, and online at Waterstones, Book Depository and from the author’s website.