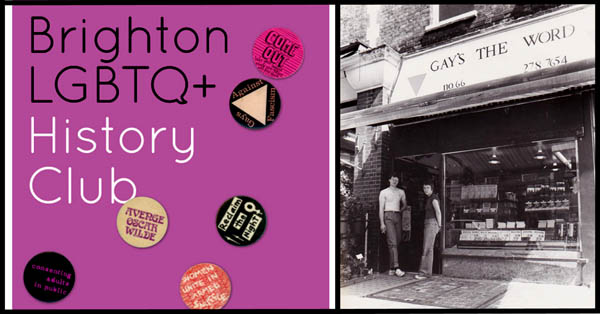 For their second session of 2019, Queer in Brighton the LGBTQ+ History Club and Pink Fringe welcome filmmaker and activist Janet Jones.

JANET is a lesbian researcher living in West Yorkshire. Now in her 50s, she has been politically active since her teens, in defence of both women’s rights and LGBT+ equalities.

Janet will be presenting her documentary A Lesbian Life: Outing the 70s & 80s a unique filmed-interview with Amanda Russell, the manager of Gays the Word bookshop in London at the time it was raided by HM Customs who seized imported books that they deemed obscene. This was 1984 and the bookshop Directors were charged with conspiracy.

Prior to the recording of these interviews, full details of the experience of the raid, and the impact of the legislative and cultural context at the time remained a partially untold story, which is also therefore a significant part of our hidden LGBT+ history.

Amanda’s role as manager of the bookshop at the time put her in the position of potentially appearing at the Old Bailey on charges of defrauding HM customs, and the importation of material deemed obscene.

Her experience was also a key part of the introduction of Section 28 as she was the person who deposited the title Jenny lives with Eric and Martin into the school’s library at their request, for material showing positive images of young people and homosexuality.

The visibility of lesbian activism in providing a space for marginalised groups such as Lesbians and Gays Support the Miners to meet at the bookshop was entirely omitted from the 2004 film Pride. The reasons for this are unclear but it does raise a question about lesbian visibility in history, which elements of her story demonstrate.

Cost: The LGBTQ+ History Club is open to all (18+) and free. Booking however is necessary as the Club is very popular and capacity is limited. To reserve your free ticket, click here: