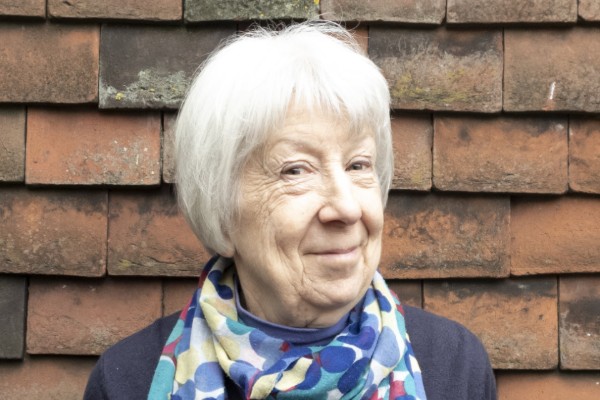 Author Jane Traies, who has lived through some of the most defining moments of LGBTQ+ history, tells Jaq Bayles how documenting the experiences of her contemporaries and those who came before changed her life.

History shapes everyone to an extent, but for Brighton-based Jane Traies – author of The Lives of Older Lesbians: Sexuality, Identity and the Life Course, and the recent Now You See Me: Lesbian Life Stories – engaging with the past in an intimate way ended up fashioning her future.

Formerly a school teacher for 35 years and now just turned 75, she found a whole new life when she began studying for a PhD in Gender Studies at Sussex University some nine years ago.

“When you’re a teacher you can’t imagine you’d ever be anything else in your life,” says Jane who, after retiring, “did all sorts of things”, including diversity training, consultancy, leadership coaching and moving to the Welsh Borders, where she ran a couple of cottages. But this latter move proved problematic when her long-term relationship broke down and she found herself single at the age of 60.

“If I’d known I was going to be single in my old age I would never have gone somewhere so remote. I was getting lonely and miserable and bored and a friend said ‘you should do something with your brain’.

“I chose a one-year course in Gender Studies at Birmingham and at the end of that year I was loving it and determined to go on to do a PhD. Someone said I should find a tutor whose work I appreciated and who was going to be sympathetic to what I wanted to do. I took a book off my shelf by Sussex University professor Sally Munt and wrote to ask if she’d agree to be my tutor. For the next two terms I drove down from Shropshire to Brighton every week – it took five hours each way on a good day but it was one of the best things I have ever done.”

While she inevitably ended up moving south, that level of commitment is characteristic of a woman determined to keep unearthing the untold stories of the lesbians who lived without the freedoms enjoyed by many today.

“As part of my post-grad work I did a lot of oral history – that was the magic thing. I interviewed all these older women who identified as lesbians – the oldest born in 1919, the youngest in 1950.” And these accounts were the inspiration for and basis of her book Now You See Me: Lesbian Life Stories, which was published some 18 months ago and is already on its third reprint.

“A couple of years ago I picked up on some stories I had only used fragments of in my research because I wanted to give something back to those women who had given to me. I thought I was only writing the book for our community but it sold and sold and is still bouncing off the shelves at Gay’s The Word.”

Inevitably Jane encounters questions about her use of the word ‘lesbian’ in today’s lexicon of alternative language, and she recalls meeting a young woman who had done some research on how teenagers today identify themselves: “They identified as everything from queer to gay to trans etc – there was even Sapphic and, here’s a blast from the past, woman-loving-woman – but not one identified as lesbian.”

But she points out that under the LGBTQ+ umbrella she tries to keep the voices of the women whose histories she traces as “we can only define ourselves with the words and identities that our historical time gives us”.

“Women born in the 1920s, 30s, 40s didn’t have ideas or words such as non-binary or gender fluid etc, which may have been very helpful”

Equally she believes that having access to the hard-won rights of a newer generation would inevitably have changed the course of the lives of some of these women. “There are women now of my age who are butch lesbians, but if they had been born 40 years later that might not have been the case. Women born in the 1920s, 30s, 40s didn’t have ideas or words such as non-binary or gender fluid etc, which may have been very helpful.”

Many of the women she interviewed had lived their lives in the closet through fear. While romantic friendships between women were perfectly acceptable throughout the late 1800s “and they could be private, by the time they were middle aged it was being redrawn as sick, perverted and that must have been woeful for them”. Throughout the 1970s and 80s the big question on the lips of those who studied these romantic friendships was “did they have sex?”, says Jane – the publication of the diaries of Anne Lister in 1988 finally answered that question. And the retelling of the story of Gentleman Jack on TV brought that world to the attention of a great many more interested parties.

Of course, throughout the early days of the fight for decriminalisation and well beyond, depictions of lesbians in popular culture were generally desperately depressing affairs. “Mostly there had to be an unhappy ending – even if it was the dog dying. Over the last 50 or 60 years of course there’s been a progression to a much freer and just socioeconomic situation.”

The pursuit of a more free and just society is high on Jane’s agenda and, among the many conferences and history-related events she is continually invited to, she is embarking on another project dear to her heart, working with the Lesbian Immigration Support Group in Greater Manchester. “The next thing I’m doing is some life history work with some lesbian asylum seekers. Their stories are not understood.” It occurred to her that being not only a woman but a lesbian and of colour the cards become ever more stacked against you in society, so she is determined to give these women a voice too.

“I don’t want to interview lesbian celebrities or people we all know about, but people who lived in the closet. I am interested in the stories of people who haven’t been told.”