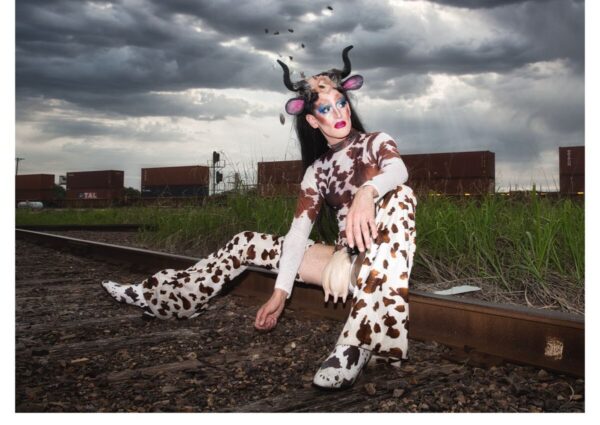 Fierce is to celebrate 25 years of bringing new and exciting performances to audiences in and around Birmingham with its largest ever festival this October, exploring themes such as First Nations politics, non-human perspectives, rituals of cleaning and healing and gender identity, with an emphasis on platforming trans artists.

Featuring 50 events and artists from 16 countries and six continents, the festival, taking place between October 11-16, is an eclectic mix of thought-provoking, fun and entertaining works including theatre, music, dance, parties and performance art.

With shows featuring scarecrows, a giant latex pig, the chance to become a member of a wolf pack and art made from everyday rubbish, Fierce festival promises to have it all.

“Our current strapline is ‘performance, politics, parties, pop’ which I think sort of nails it in terms of our areas of interest,” says artistic director Aaron Wright.

“We’re really going for it this year with our biggest programme ever. There are so many great projects which we’ve had on the table for so long and now it’s like ‘OK, we can finally do this, so let’s make it as impactful as we can.’”

Fierce began life in the ’90s as Queerfest, aiming to offer audiences in the city alternative, outsider and unusual shows which they might not otherwise have the chance to experience.

“Fierce has always had this belief that experimental arts practice is accessible and should be reaching much wider audiences,” says Aaron.

“The Fierce brand has always been a bit cheeky, a bit tongue-in-cheek, a bit playful, it’s not taking itself too seriously. We’re really interested in the different types of art and performance being made around the world and particularly that we’re not used to seeing in this country.”

With that aim in mind, the festival brings together live performance in traditional arts venues, party nights, site-specific arts and participatory shows. The festival will also build on two hugely successful events this year – The Healing Gardens of Bab, which took gardens as inspiration to create contemplative events, and Key to the City in which participants received a key offering access to sites in Birmingham usually closed to the public.

“We like to use the city in unusual ways and help audiences encounter their city in new ways,” says Aaron.

“We like to use the city in unusual ways and help audiences encounter their city in new ways. So this year we have Wolf Safari with Finnish collective Other Spaces, who, in a workshop, teach the behavioural techniques of wolves. All the participants go out on the streets and, starting from different points of the city, they’ll then use these techniques to find each other, to form a pack, and go on a hunt.

“In terms of discovering the city in new ways we’ve also got The Golden Age, an archaeological tour of the Bullring happening with Swiss artists Igor Cardellini and Tomas Gonzalez. They’re looking at these places we often frequent but we never really pay full attention to, how these spaces are designed and what they say about 21st century society.”

Much of the work is also inspired by the desire to encourage audiences to re-think subjects they may believe they are familiar with.

“The most common feedback I got from Key to the City was that people loved the idea and that was a boost of confidence because that’s what artists do – they come up with brilliant ideas.

“So, for example, with Farm Fatale by French director Philippe Quesne, which is our big opening night, the premise for this work is that there are five scarecrows who’ve lost their jobs because of climate change, so they start a pirate radio station instead. People get that premise so can immediately connect to it – and then it’s a totally fantastic show.

“And we also have enormousface from near Seattle with Nothing Is Also Possible. They start from a very simple idea that we are the only animal in the world that creates rubbish, which is fascinating and shocking. So they will be in residence over the week, making sculptures and performance from rubbish they find on the streets.”

Fierce has always looked to champion alternative and outsider views and this year’s festival is no exception.

“One of the faces of Fierce is incredibly counter-cultural and we’ve always wanted to platform voices that perhaps were not being platformed as much as they should be,” says Aaron. “These outsider perspectives sometimes stop audiences in their tracks so they’re thinking ‘gosh, what are we doing?’

“One big angle this year, particularly with hosting the Commonwealth Games, is that we’re platforming a lot of first nations artists. So SaVAge K’lub are holding an event at Birmingham Museum called Kolonial Karma, which is nudging us to think about our histories and the legacy of empire.

“And indigenous pop star Elisa Harkins, who is of Cherokee heritage from Tulsa, Oklahoma. In her show, Radio III, she’s using old Cherokee folks songs because this language is being lost. Through beautiful music she’s preserving her culture and bringing it to new audiences and making us think about why this language is being lost because of massacres hundreds of years ago.”

Fierce also has a long history of platforming trans artists and has this year worked with Rosana Cade and Ivor MacAskill on The Making of Pinocchio.

And there is lots of fun to be had including Alice Rippoll and Cia REC in Lavagem, which uses buckets, soap and water on stage to explore the art of performance while also making political points.

“Alice and Cia REC live in the favelas in Rio de Janeiro and they’ve become one of the most exciting and most acclaimed theatre companies all over the world, but they’ve never been to the UK before,” says Aaron. “We’re really excited to be bringing these ten Brazilian dancers to Britain.

“And this year we’re having a birthday party The Ho Down, a big sort of barn dance affair in Digbeth with a farmyard theme. A latex pig the size of a truck will give birth to six piglets, there will be a bucking bronco and we have a singing operatic cow from Zurich. I think the party will be a highlight – a fun and quite silly night out but you’ll get to see some really good performance as well.”

Fierce also has a role to play in showcasing Birmingham-based artists.

“There’s a lot of work that Fierce has had a hand in developing including by local artist Demi Nandhra (The Trauma Show), and Liz Ord’s Peaked Too Soon – these are all shows that we’ve been talking to the artists about for a number of years. We’re inviting theatres from across the world to see work being made in this country and in Birmingham.”

With so much on offer, including a host of world premieres and free performance, Aaron says audiences are spoilt for choice.

“People should just pick something they think sounds interesting and come along. Whatever they see, I hope they will see things they’ve never seen before, experience alternative viewpoints, think about things they may not have thought about before – and have a great time experiencing the performance.”