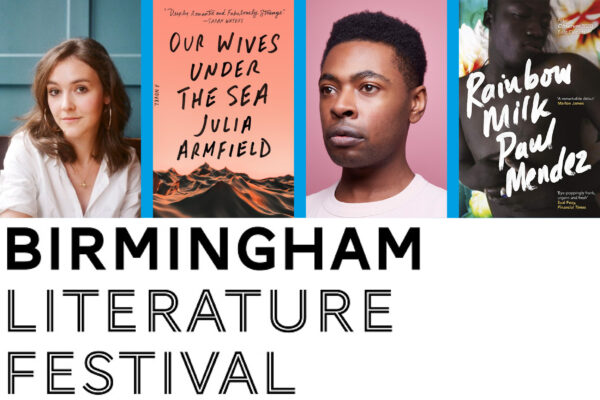 Two of the UK’s “most exciting voices in queer writing” will come together during Birmingham Literature Festival to discuss “their novels, their writing and the LGBTQ+ writing scene, which is finally seeing the celebration it deserves.”

Chaired by guest curator Paul McVeigh, the event will feature Julia Armfield, author of Our Wives Under the Sea – which is her first novel following the success of her critically acclaimed short story collection, Salt Slow. Julia will be joined in conversation by Birmingham-based writer Paul Mendez, whose début novel, Rainbow Milk was published in 2020.

Julia Armfield is a fiction writer and playwright who was shortlisted for the 2019 Sunday Times Young Writer of the Year, commended in the Moth Short Story Prize 2017, longlisted for the Deborah Rogers Award 2018, and won the White Review Short Story Prize in 2018. Her novel, Our Wives Under the Sea, is a story of love, loss and grief that follows the relationship between Miri and her wife Leah, after Leah returns home from a deep-sea mission that ended in catastrophe, leaving her with a darkness that she carries back with her onto dry land, causing her to slip from Miri’s loving grasp.

Paul Mendez is a British writer whose début novel, Rainbow Milk, was an Observer Best Debuts Choice, and was shortlisted for several prizes, including: the Polari First Novel Prize, the Gordon Burn Prize, the Jhalak Prize, the Lambda Literary Award in Gay Fiction and a British Book Award (Fiction Debut). The novel is a coming-of-age tale about nineteen-year-old Jesse McCarthy – a Black, gay, British boy from Wolverhampton who moves to London on the cusp of adulthood. In Rainbow Milk, Jesse struggles with his Jehovah’s Witness upbringing, alongside his racial and sexual identity. Paul Mendez is currently working on adapting the novel for TV, plus he is also a student on the MA programme in Black British Literature at Goldsmiths, University of London.

The event with Julia Armfield and Paul Mendez will be held at Birmingham Rep Theatre on Saturday, October 8 from 2 – 3pm. Tickets £8 (£6.40 concession). Birmingham Literature Festival will be held October 6 – 9, and tickets to all their events are available online.