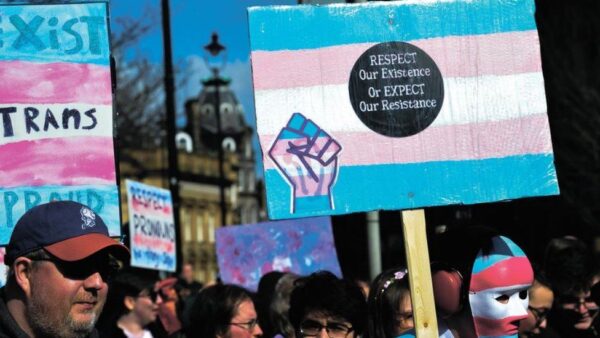 The fight over transgender rights has become increasingly prominent in recent years. The government caused a major row in April when it sought to exclude conversion therapy aimed at transgender people from its ban on the practice. A YouGov poll at the time showed that the majority of the public disagreed with this decision.

But where does the public stand on the broader transgender discussion? A new YouGov study, the third, and most expansive, in a series spanning back to 2018, shows evidence of an overall gradual erosion in support towards transgender rights. In some areas the shift is very pronounced. We have reproduced some of the results below…

The debate on transgender rights is one of the foremost frontlines of the ‘culture wars’, a series of arguments on social justice that also encompasses topics like Britain’s colonial history, Black Lives Matter and free speech in universities.

But despite Westminster’s fixation with such issues – alongside sections of the media and Twitter – the public themselves are far less invested. Two thirds of Britons say they pay little attention (42%) or no attention (24%) to the debate in the media and politics about trans rights.

Respondents were given a brief explanation of what the current requirements are for someone to legally change their gender (exact wording can be seen in the chart below), including the fact that a doctor’s approval must be obtained for someone to legally transition, and that a trans person should have to live as their ‘new’ gender for two years before they can gain legal recognition.

In principle, Britons oppose making this process easier at a rate of almost two to one (50% vs 26%).

Opposition is higher still when it comes to the specific aspects we highlighted. By 60% to 17%, Britons think the legal process should continue to require a doctor’s approval, and by a similar 59% to 15%, Britons say transgender people should continue to have to show they have lived in their new gender for two years before the change can be legally accepted.

There has been a recent spate of sporting bodies imposing bans on trans athletes competing under their new gender, including British Triathlon, the international swimming body Fina, and International Rugby League in the last month alone.

The trans sport debate has focussed primarily on the ability for transgender women to compete, with opponents arguing they have an inherent physiological advantage even after transition.

The public are strongly opposed to trans women athletes participating in women’s sporting events, by 61% versus just 16% who are supportive.

It is not clear, however, how much of this is represents acceptance of the argument that trans women athletes have an unfair advantage, because Britons also tend to be opposed to transgender men competing in men’s events. Such opposition is lower, however, at 48%, with 29% in favour.

How have attitudes on transgender issues changed over time?

What the results consistently show is an erosion of permissiveness towards transgender rights over that time period. In some cases the difference is small, but in others there has been a substantial shift.

On the key premise of whether Britons accept that a trans man is a man and a trans woman is a woman, there was net agreement that they are back in 2018 (+11, with 43% agreeing and 32% disagreeing in both cases).

This agreement has diminished, with Britons now split, with 38% agreeing and 40% disagreeing that a trans woman is a woman, and a 39% / 39% split on whether or not a trans man is a man (net scores of -2 and ±0, respectively).

The biggest single shift that has taken place since 2018 is over trans women’s participation in women’s sports. While this was already unpopular – back in 2018 Britons said such participation should not be allowed by 48% to 27% – sentiment is even more negative now: 61% now say trans women should not be allowed to take part in women’s sport, with just 16% believing they should.

There has likewise been a negative shift in attitudes towards trans men participating in men’s sport, albeit to a lesser extent and from a higher initial starting point: while Britons were split 37% in favour vs 39% against in 2018, these figures have since shifted to 29% and 48% respectively.

On issues of facilities access for trans people, where Britons once held somewhat permissive views, those attitudes have since become more split, if not outright negative. While there was previously a clear margin of acceptance for trans women to use women’s changing rooms, toilets and refuges, Britons now tend to oppose the first and are divided on the second and third.

For trans men, this margin of acceptance has also closed, although opinion is still slightly in favour of allowing access to men’s changing rooms and toilets.

What is notable about opinion on facilities access, however, is that all of the shift has taken place since 2020. Between 2018 and 2020, willingness to allow trans men and women to use the changing rooms and toilets of their preferred gender (as well as refuges in the latter case) remained virtually static.

On the broader issue of whether trans women being allowed to use women’s spaces presents a genuine risk of harm to women there has also been a decline. While Britons thought there was no such risk by 43% to 29% in 2018, by 2022 this had shifted to 39% of Britons saying there is such a risk, compared to 32% saying there is not.

That said, there has been a marginal shift in favour of greater rights in one area: legal recognition. While the number of Britons who think it should not be made easier for people to change their legal gender has stayed about the same over the three studies (between 47% and 50%), there has been some slight movement on the specifics of the process.

The number of people who think a doctor’s approval should need to be obtained in order to secure legal recognition of a gender change has fallen slightly, from 65% to 60%. There has likewise been a five point decrease in the number of people saying that living as your preferred gender for two years should also be necessary to legally change gender (from 64% to 59%). In both cases, this difference does not entirely reflect a shift to the opposite view, and indeed in both cases it means that the public are still firmly against making changes to the legal process.