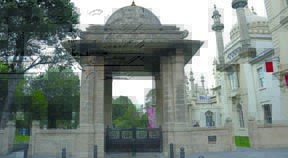 A wreath laying ceremony is being held at India Gate at the Royal Pavilion in Brighton this Sunday, October 19 to commemorate Indian soldiers who were treated at hospitals in the city during World War One.

THE INDIAN High Commissioner, HE Mr Ranjan Mathai; the Mayor of Brighton & Hove, Cllr Brian Fitch; and Davinder Dhillon, chairman of the Chattri Memorial group; will be among those taking part in event, which will take place at 2pm and is open to all.

The ceremony is being organised by Brighton & Hove City Council, in conjunction with The Chattri Memorial Group and Brighton & Hove Black History, as part of the city’s World War One commemorations.

During World War One a number of buildings in the city, including the Royal Pavilion, The Dome and the Corn Exchange, were converted into military hospitals to care for Indian soldiers wounded fighting on the western front.

The India Gate, at the entrance to the Royal Pavilion in Pavilion Gardens, was a gift from India to commemorate soldiers tended in the Pavilion and was unveiled by the Maharaja of Patiala in October 1921.

A gallery at the Royal Pavilion recounts the story of the Indian Military Hospital through archive photographs, letters and film and the Chattri Memorial on the Downs north of Patcham honour those Indian soldiers who died.

Cllr Fitch said: “The city played an important role as ‘Dr Brighton’ during World War One and thousands of Indian soldiers were brought here to recover by the sea.

“The wreath laying at the Royal Pavilion’s India Gate is a fitting way to honour their memory and the contribution they made in the war, fighting so far away from home.”