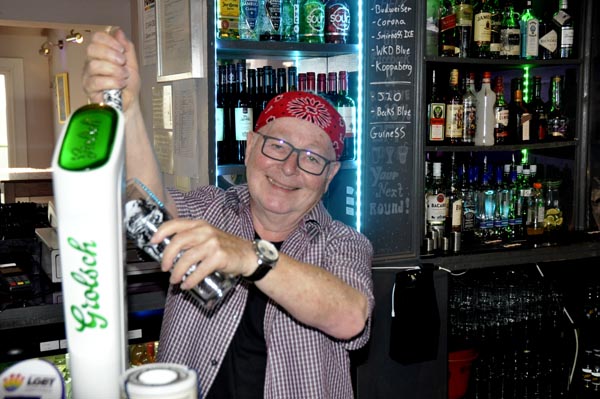 Morgan Fabulous pops along to the Queens Arms to chat with new boss John Michael Fletcher who is fulfilling his life’s ambition to run a bar.

The Queens Arms is one of Brighton’s oldest established gay bars providing top quality cabaret for over thirty-five years.

It has seen many legendary managers come and go over the years, and now is managed by John, a retired furniture manufacturer and upholsterer who has a life time of business and customer service experience behind him.

The Queens Arms is known for top quality drag entertainment and its friendly atmosphere – it is also the first bar I visited when I originally moved to Brighton and was welcomed with open arms.

John is intending to shake things up a little bit and is presently looking for new unique acts and singers to perform at the bar, so the entertainment on offer becomes more diverse and appeals to more people.

A few weeks ago saw the successful launch night of Men for Men Monday special, a full strip show, presented and promoted by Davina Sparkle, (unfortunately Davina wasn’t stripping, but it was still a hell of a show). Plans are in place to overhaul the front of the pub, with eye-catching light installations and displays to advertise the week’s entertainment.

John was raised in Lancaster and lived in West Yorkshire until he moved his import/export furniture business to Brighton in 1993 and became the owner of Marthas Barn.

However, he decided he wanted to travel and take his love of furniture with him, so he moved to Cape Town in South Africa and commuted back to Brighton once a month to over-see his business.

After seven years of success in Cape Town, it was time to move back to Brighton as the land that the business was located on was being bought by a major company who didn’t want to continue renting the property for retail, so Marthas Barn sadly closed.

John decided to take his business to Chiang Mi in Northern Thailand, where he made furniture for big brands such as Zara Home. After six successful years there, he decided to retire, left Thailand and moved back to Brighton, where did voluntary work at the hospital for the Salvation Army and for the homeless at the Dorset Gardens Methodist Church.

He returned to Thailand for a holiday where he met his partner. It wasn’t until that point that John came out to himself, after many years in the closet (I had to get that in seeing as he is a furniture maker). He had often thought about his sexuality, but never felt the time was right, until then. He told me that at the time, very few people knew, but I have his full permission to include it in this article.

When he finally returned to Brighton to live he felt like taking on a new project and jokingly offered his services to run the bar at the Queens Arms, which turned into reality a few weeks later and he is now looking for staff to join his friendly team!

John enjoys reading; his favourite book is Katherine, by Anya Seton. He also loves music and listens to everything from Maria Callas to Lady Gaga.