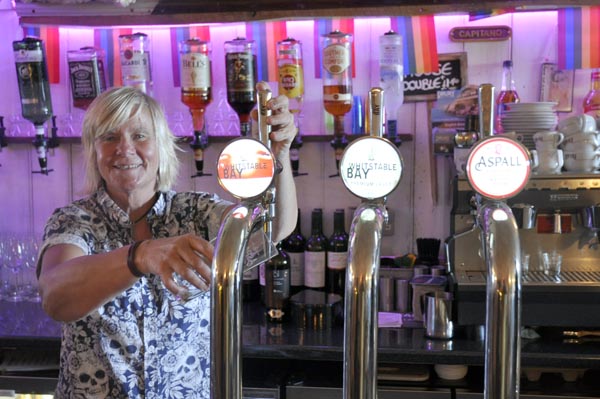 Morgan Fabulous chats to Jackie Perry, the co-owner and manager of Velvet Jacks on the border of Brighton and Hove about what makes it the perfect place to relax and have a cocktail.

Velvet Jacks is a small and quirky independent bar with both friendly staff and customers, it’s the kind of place you can walk in to on our own and instantly feel at home and relaxed. It celebrates it’s second year birthday on May 23, which is also the date of Jackie’s wife, Eve’s birthday.

Jackie grew up in the east end of London, in the 50’s, in the kind of place where your Aunt and Uncle lived next door. The whole neighbourhood was like one big extended family and you could leave your doors and windows open without a second thought.

She worked as a prison officer for 14 years, with women, young offenders and people serving a life sentence. But, Jackie wanted to see what else the world had to offer and decided she would go traveling.

She travelled around Australia on two separate occasions for 6 months at a time, lived in Key Largo, which is an island in the upper Florida Keys archipelago for three and a half years and also backpacked around South East Asia for a few years in the 90’s.

Before Velvet Jacks, the place had been a family run restaurant for the last 30 years. Her wife, Eve, owned the tattoo shop next door to the restaurant and had always wanted to turn it into a bar if the opportunity arose. When she heard it was being sold, she managed to persuade the owners to sell it to her.

As Jackie had already run a themed bar and restaurant in the east end of London, which unfortunately attracted a poorly behaved crowd, she was more than happy to get back behind the bar and transform it into somewhere she and like-minded people would love to socialise in.

They totally redecorated and replaced everything in the bar except the Artex ceiling, transforming it into a cosy hang out. Jackie says it feels like a cave inside and keeps them nice and warm in the winter. They have a team of five all-female staff who are very friendly and accommodating.

The bar attracts a wide clientele from gay woman and men who enjoy good wine and cocktails to locals dropping by for an after work drink. Jackie and Eve love dogs and enjoy being around people who share their interests.

In fact, most days you will find Olive, their Airedale Terrier entertaining her friends to a Gin bowl in the bar.

First and foremost Jackie is a people person and the bar is a way of life to her. In fact it is her life, and she thinks of it and her regulars, like her large extended family.

It is evident in the decor and the great customer service that Jackie loves the bar and wants others to love it just as much as she does. She serve amazing cocktails and Gin bowls, and everyone who drinks there is guaranteed a warm and friendly welcome.