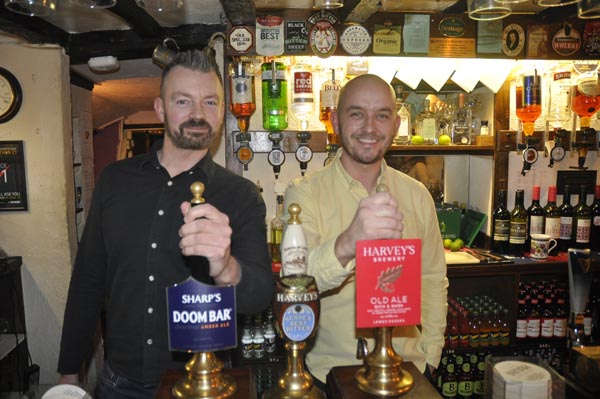 This month Morgan Fabulous chats to Philip Sherrington and his partner Paul Carter, the owners of The Rottingdean Club nestled along the coast in the lovely village of Rottingdean.

Built over 400 years ago the club was formerly part of the Olde Place Hotel which is now a residential address. There are three different drinking and dining areas and uniquely for Rottingdean a large secure beer garden bedecked with lush trees and plants, a great sun trap on sunny spring and summer afternoons.

They have members who say they have been going to the club for at least 50 years. “We have everyone here,” Philip explains: “actors, writers, wealthy retirees and young professionals, we have an eclectic mix but the great thing is that they all blend well and get on together.”

When they bought the club the couple made the decision to reach out and market to a younger, more fluid audience.

Philip explains: “As Brighton continues to expand the younger generation will move further out and will want somewhere sophisticated to go and enjoy themselves. We need to be at the front of the queue in reaching out to them and persuading them to socialise here with us.

They love putting on great events and parties,  and get real enjoyment from their customers reactions.

He continues: “We meet so many people from different backgrounds, and love listening to their stories about how they have got to where they are today.”

At the rear they have a huge garden, and when the weather get warmer intend to put on lots of outdoor events. From Spring they will be installing a new gazebo, comfortable patio sofas and heaters to make the garden experience more attractive for their members.

Philip and Paul are passionate supporters of MenTalkHealth; an organisation set up by two Brighton based guys raising awareness for men with mental health issues, encouraging them to open up, talk and come to terms with their mental health. Proceeds from their quiz nights, raffles and more go to support the work of the organisation.

Before they bought the club, they both worked in commercial roles in London, Paul for a large commercial radio group and Philip worked in tourism. “The commute was hell and we took a leap of faith in taking the club on,” he said.

Philip grew up in Bolton Lancashire, “it wasn’t a great upbringing and I literally couldn’t wait to leave home” which he did at 17. He moved to Manchester where he lived until 2006 when he moved to London and then to Brighton three years ago.

He loves living in Brighton and would never go back up North willingly, “I grew to despise London mainly thanks to public transport, but Brighton is just such a great place to be, having the city and its amenities and of course the beach on tap. Why would you leave?”

Philip doesn’t have any hobbies but loves drinking and being with new people. He says: “If I were to take up a hobby (I won’t) I think I would enjoy fishing.” His favourite film in the entire world is definitely Sleeping with The Enemy, “it’s such a lovely film, thrilling and realistic and Patrick Bergin is great on the eye.”