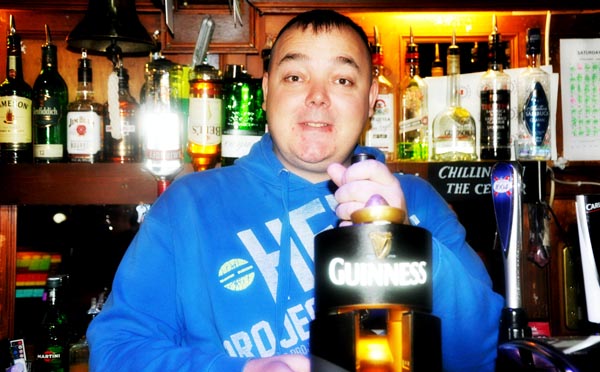 This month Morgan Fabulous finds out why Lee Cockshott, owner and manager of the Marine Tavern, never has a moment to himself.

Lee grew up in Manchester where he became very fond of the commercial gay scene. Aged just 18, he invested in a bar named the Woolpack and worked there at weekends while studying social work at university.

After working his way up the social work ladder he decided to take his career in a completely different direction. After owning a guest house in Scotland and later a hotel in Eastbourne, he decided, after constantly commuting here for nights out, to move to and invest in Brighton.

He looked at a couple of gay venues and decided to buy the Marine Tavern in Broad Street, a traditional bar with lots of character. He also manages Poison Ivy at the bottom of St James’s Street, which is under new ownership.

Since taking over the Marine Tavern he’s introduced a variety of themed nights. If you’re new to the area and want to make new friends, join his Bar Crawl every third Friday of the month at 8.30pm. It is hosted by local drag queen, Stephanie Von Clitz, and you get a free shot in each bar visited, which usually includes the Marine Tavern, the Bulldog, the Zone, Queen’s Arms, Bar Broadway and Poison Ivy!

Every Tuesday is Quiz & Curry night with curry, including naan bread and rice, costing just £1! Unbelievable value. There’s also a vegetarian option available when booked in advance through their Facebook page.

Traditional roast diners are served every Sunday, followed by Drag Open Mic night where you get £10 cash for a 10 minute performance, providing you’re in drag. During December, Christmas dinner will replace the traditional roast each Sunday.

Lee also organises and promotes The Big Scrum, a rugby and sportskit night that is currently held at Subline in Brighton as well as other venues in the UK and Ireland. For details of the next Scrum, click here:

Twice a year, in February and October, Lee organises a trip to Blackpool for his customers with hotel and transport included in the price. This year’s trip cost just £149 and it’s a great way to meet new people and see another part of the UK. If you don’t have a car, Blackpool can be very timely and expensive to get to, so it’s an opportunity not to be missed! Ask at the bar for details and prices of the next trip in February 2017.

In his spare time, Lee loves travelling around Europe and clubbing in Brighton and London amongst other places and he’s pretty confident that there isn’t one gay club in the UK that he hasn’t been to. Now that’s dedication for you.

Lee has a love of horror films, which was reflected in the Marine Tavern’s Halloween decor this year. For all of October, he boarded up the front of the bar to look like a post-apocalyptic movie set with a smoke machine making it look like the bar was on fire.

A special date for your diary is Friday, November 25 when Ruby Murry, who appeared on Britain’s Got Talent, will be performing live on stage from 9pm.