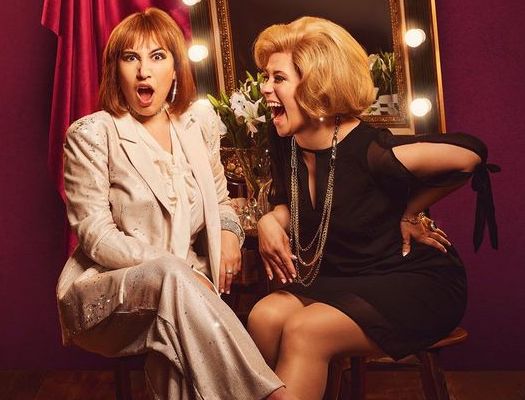 Barbra Streisand is one of the greatest singers on the planet. Her Brooklyn contemporary Joan Molinsky – better known as Joan Rivers – became one of the greatest comedians on the planet. In terms of their personalities, they couldn’t have been more different. On the other hand, they shared striking similarities. They were two hugely ambitious Jewish girls determined to make it in a man’s world. They both succeeded in making it to the very apex of their professions and stubbornly stayed there. Their paths did cross in a much disputed theatrical collaboration before they were famous.

“When Barbra Streisand was nineteen she was no superstar. She was sleeping on her mother’s couch. Her step father was making nose jokes. She was working in a Chinese restaurant. In an attempt to get out of Brooklyn she has a dream: to act.”

“Thus she finds herself in an off-off-off Broadway production. The play is lousy. The theatre is a shabby upstairs room. The woman playing her lesbian stalker? A recently divorced twenty four year old Joan Rivers. Joan is living with her parents. She wants to break out of her dull middle class life. Before she dreamed of being a comedian? She was going to be an actress. Thus she shares a shabby stage in a shabby theatre with the young, insecure Streisand.”

This legendary encounter was told by Joan River’s in her memoir Enter Talking. The story sounded too good to be true, and it was. River’s said a lot of things for comic effect – she never let the truth or political correctness get in the way of a good joke. She told to story so many times it developed its own mythic truth.

River’s joked that when she bumped into Streisand at parties she would be unceremoniously ignored. Streisand never commented on her allegations and may never even have been aware of them. (When Streisand had a problem with her iPhone she called Steve Jobs and asked him to fix it – she lives in her own world).

Playwright Roy Smiles has brought the two divas together on stage to tell his own version of the story. It’s called The Funny Girls (what else would it be called?). Finding two actresses up to the task of playing these grand divas can’t have been easy. Mia Tomlinson will play Joan and Rosanna Harris will play Babs. They have both nailed the looks, that’s for sure!

“Both believe they are the most talented Jewish woman on the planet. One of them is wrong….”

Find out how Roy Smiles untangles the mystery in this brand new show. This really is as camp as it gets.