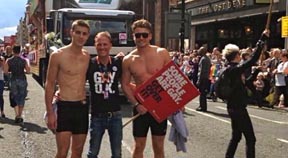 The charity is being set up to fight homophobia through sport.

Over the last five years the naked oarsmen of the Warwick Rowers calendars have grown dramatically in popularity. The team did their first calendar in 2009 to raise money for the rowing club and now sell their products across the world, raising money for their new charity initiative Sport Allies as well.

Angus Malcolm, photographer and producer of the Warwick Rowers calendar, said: “We had a great time at the event – the LGBT community are fantastic supporters of the boys and we wanted them to know more about our ambitions for the charity.”

Sport Allies was launched in February this year and has already won the backing of top professional services firm Ernst & Young (EY).

The aim of the charity is to create a world where all young people can access sport as an opportunity to define, develop and express themselves without fear of prejudice.

In April, leaders from 17 university sports groups across the UK attended a summit in London to plan the development of the Sport Allies outreach programme.

Antony Cotton, who is a long-time supporter of the calendar and the charity, said: “This is an amazing initiative, because it’s really important to tackle homophobia in sport. I’m proud to call the Sport Allies my friends.”

The Warwick Rowers have launched a crowdfunder campaign to make 2015 another record-breaking year and raise even more money for charity. There are crowdfunder options for every pocket – from £10 for a digital download of the new calendar up to £400 for the opportunity to meet the boys in person at a live calendar shoot!