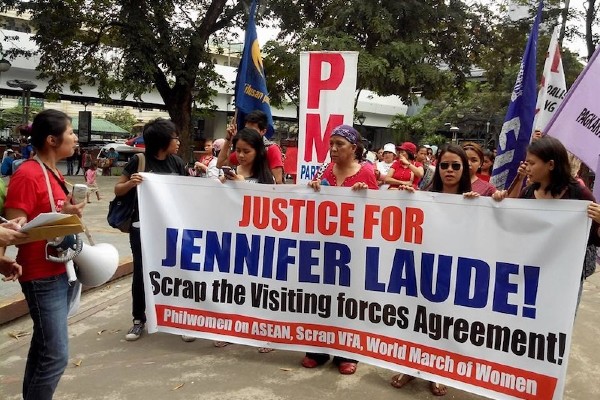 Philippines president Rodrigo Duterte has ‘granted an absolute pardon’ to American Marine Lance Cpl. Joseph Scott Pemberton after he killed a transgender Filipino woman, Jennifer Laude, in 2014. Pemberton reportedly strangled Laude in Olangapo City after the pair checked into a local hotel together. Pemberton has only served half of his ten-year sentence.

In court he said he attacked Laude after ‘realising she was transgender’ but claimed she was alive when he left the room. His words in court described gay/trans panic defence which attempts to legitimise violence against the LGBTQ+ community by using the victim’s gender identity or sexuality to excuse the perpetrator.

Lawyer Rowena Garcia-Flores told the Washington Times their client Pemberton was ‘very happy’ to receive the news, and the pardon would result in immediate prison release. Duterte addressed his move on television on Monday 7 September, saying Pemberton had been well behaved in prison and this was the ‘fair’ thing to do.

Filipino human rights group Karapatan condemned the release of Pemberton, saying it is ‘a despicable and shameless mockery of justice’. They argued Duterte’s decision was him bowing to ‘imperialist interests of the US’ after the case caused tension between the two nations. #JusticeForJennifer has trended globally on Twitter. Site users tweeted Pemberton ‘deserves to rot in jail for life’ and have demanded ‘justice for all victims of hate crimes and imperialism’.