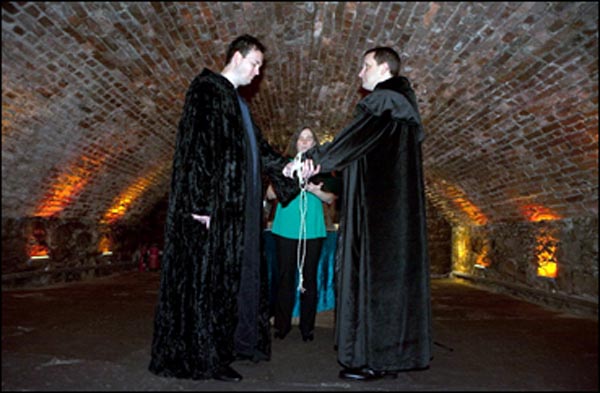 Tom Lanting (34) and Iain Robertson (39) were married in a ceremony which saw them literally tie the knot.

The couple, who have been together for 12 years, are both Hedge Witches and live in Scotland’s capital city. They were married in front of family and friends in the 16th century vaulted cellars of Marlin’s Wynd by Louise Park, Presiding Officer for the Pagan Federation (Scotland). The ceremony encompassed ancient Pagan traditions including casting a circle, invoking the elements of earth, air, water, fire and spirit, exchanging rings, and jumping the broom.

The Equality Network, which attended the ceremony, has hailed the marriage a “mark of equality and freedom of belief in Scotland”.

Scotland is the only part of the UK that allows Pagan and other minority religious and belief bodies to solemnise legal marriages. The Pagan Federation (Scotland) has been able to conduct hundreds of legal mixed-sex marriages since 2005.  Following the passage of the Marriage and Civil Partnership (Scotland) Act 2014, the Pagan Federation (Scotland) was one of the religious and belief organisations that opted in to conducting same-sex marriages.

Speaking after their marriage ceremony, Tom and Iain said: “Getting married in a legal Pagan ceremony means so much to both of us. The new equal marriage law means that we finally have equal recognition and acceptance of our relationship, and it opens the door for all LGBTI couples to take the same step. As Hedge Witches we always wanted to have a Pagan marriage ceremony in line with our beliefs”.

Other religious and belief organisations that have opted in to conducting same-sex marriages in Scotland include the Unitarians, the Quakers, the Metropolitan Community Church, the Liberal Jewish community, the Open Episcopal Church in Scotland, the Humanist Society Scotland, various other smaller Humanist bodies, and One Spirit Interfaith Foundation. A number of these bodies are also expected to conduct same-sex weddings in the coming months.

Louise Park, Tom and Iain’s marriage celebrant and Presiding Officer for The Pagan Federation (Scotland), said: “Equality for people of all faiths is something that is very dear to the vast majority of Pagans, and the Pagan Federation (Scotland) has made equal marriage for all Pagans in Scotland one of our biggest campaigns over the last 10 years. We feel that, if any couple wish to, they should be able to make their marriage vows before their own personal Gods, friends, and family, in a religious ceremony tailored to suit their own beliefs”.

The Marriage and Civil Partnership (Scotland) Act 2014 requires local authorities to register same-sex marriages and also allows religious and belief organisations to opt in to doing so if they wish. In England and Wales Pagans, Humanists and other minority religious and belief groups are not allowed to conduct legal marriages, though they continue to campaign for the right to do so. In Northern Ireland same-sex marriage continues to be illegal in all forms.

Tom French, Policy and Public Affairs Coordinator for the Equality Network, said: “Religious and belief groups played an important role in the campaign for equal marriage and today’s ceremony is a mark of equality and freedom of belief in Scotland.

“The new law was not just about ensuring equality for LGBTI people, but also securing greater freedom of belief for the many religious and belief groups who want to conduct same-sex marriages, in line with their deeply held beliefs, but were previously denied the right to do.”

In February, Scotland became the 17th country in the world to legalise same-sex marriage after the Scottish Parliament passed the Marriage and Civil Partnership (Scotland) Act 2014 by an overwhelming 105 votes to 18, the third strongest majority for any same-sex marriage legislation in the world. The Act received Royal Assent in March and, following the passage of the necessary secondary legislation, the law came into effect on 16 December 2014.

The Equality Network has published a guide to same-sex marriage and civil partnership law in Scotland, with a Foreword from Scotland’s First Minister Nicola Sturgeon. A digital version of the guide has been published online and 10,000 copies of a printed edition are now being distributed across Scotland.

To view a copy of the marriage guide online, click here: